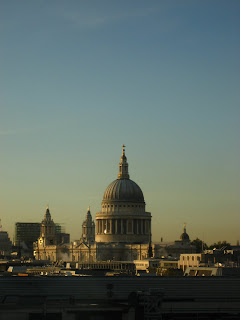 I often forget how lucky I am. I work in the heart of the City with views of the River Thames and, on the higher floors, St Pauls. The photo above was taken from my desk (alas temporary) on the top floor in November. I forget that I am close to some of London's amazing landmarks - Monument, the Bank of England and Old Billingsgate. I forget that I am 5 minutes away from Leadenhall Market (of Harry Potter fame) and Borough Market (Bridget Jones). The awful thing is that, after 7 years, it is so easy to get bogged down in the stress of work and forget about the world outside. Having had a stressful couple of weeks, the idea of lunch away from my desk sounded like bliss. So, with a brilliant blue sky and the sun shining at lunchtime, I popped across the river to Borough Market with my old housemate, K.

Borough Market is an experience that everyone should find the time to explore. It is only open on Friday and Saturday, and is deceptively large. I don't think there are enough Fridays in a year to discover every shop and stand. Borough is a fantastic place for small time producers to sell their wares to City folk coming south of the river, media types who work in Southwark and tourists. Huge rounds of cheese dwarf ostrich burgers, the smell of which mingle salivatingly with the smell of bratwurst sausages grilling alongside boar burgers. The whole event is an overload on senses. Everyone has their favourite stand. I have two. The first is an amazing gourmet sausage cafe hidden at the back - 3 different sausages in a bun - the added bonus is that they have somewhere to sit if it's raining. The second is the plant stand. I have bought a number of plants from them and they haven't failed me so far. N's passion flower is still going strong having survived it's first winter. They also stock french vegetable seeds. The packets are so wonderfully retro - I could look at them all day.

My mission today was to find the German stand to replenish N's paprika crisp supply which I had had a hand in depleting. I found the stand (well, to be fair K spotted it - I walked straight past it being adamant that it was elsewhere...), but failed on the crisp front. So, with fresh roast pork ciabattas in our grubby hands we sat in the churchyard and scoffed the lot. Well - being fussy, I picked at bits - either way - it was scrummy. Obviously pudding was called for, so like truffle pigs, we sought out the most scrumptious chocolate brownies which, combined with a takeaway decaff coffee, were delicious. Sadly, our hour was quickly up so we schlepped back across the bridge to an afternoon of Lotus notes, dreadful air conditioning and deadlines. What more could one ask for?
Posted by The domestic novice at 19:33

Email ThisBlogThis!Share to TwitterShare to FacebookShare to Pinterest
Labels: life