Autumn with a capital 'A' 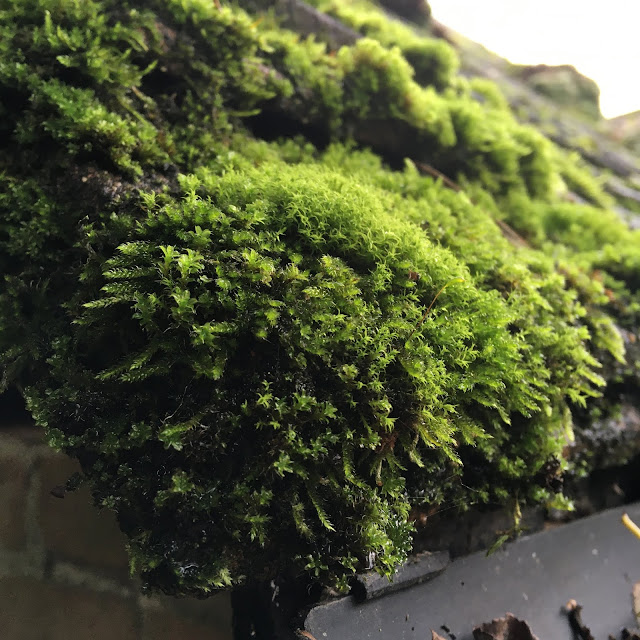 And absent which is what I've mostly been from this blog, and life if I'm entirely honest. Life has been all consuming - not busy being social, but busy with the mundane, and somewhat weighed down with the lack of progress on the house. Small wins are made when the beans nap but work has gobbled those precious hours recently - not that I'm complaining - the new job is brilliant and challenging, but also exhausting. Coupled with Mr M travelling rather a lot recently, I've been in survival mode.

But with Autumn comes change - the leaves are turning, days are shorter and it's decidedly dank. Some days have a chilly breeze which snaps at my ankles as I wait for my train and others, like today, are oddly warm with drizzle making it ideal for some weeding as the beans nap. The log burner has had its first fire laid and we've made plans for beef casserole and stuffed squash this weekend. A time for hunkering down, gathering ourselves and catching our breath.
Posted by The domestic novice at 16:33 No comments: 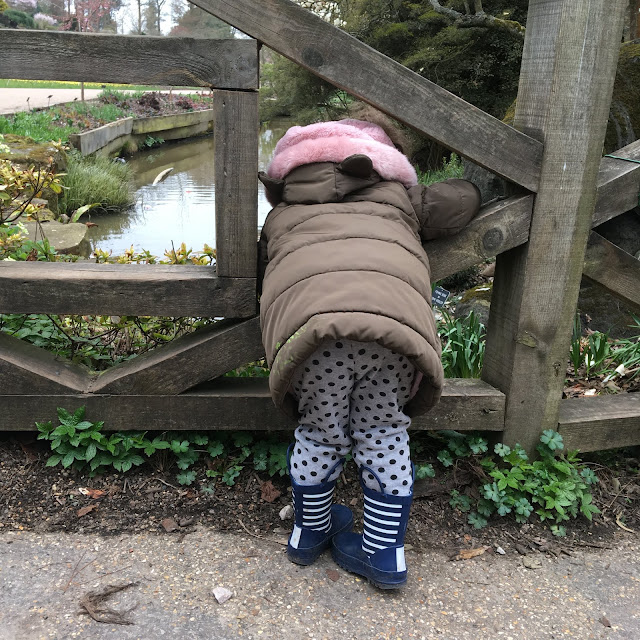 The mere whiff of an adventure has Miss A throwing on her coat, finding her shoes and spotting the Gruffalo behind the nearest bush. A couple of weeks ago, we went on our first @surreymama_meetups at Wisley. Of the three of us, I was the most nervous, A just wanted to get going and O was non-plussed in his pushchair armed with his Lego.

If I'm honest, the fear of the unknown kicked in the night before and it was Mr M who gently nudged me into going. I rarely venture out with the two of them on my own - I found it so hard to do when O was little, and now we have a nap routine, I've got the perfect excuse to not push myself out of my comfort zone. The stress levels are always sky high. Ridiculous when you see everybody else managing.

Anyway - we made it. We met up with four lovely mums and their little ones. A, after a little bit of encouragement, merrily gallivanted about with the other toddlers and O happily sat in his pushchair. I realised that a) meeting new people is fun (if you like embroidery, take a look at Sophie's website and if you're looking for party downloads, take a look at Little Party Hacks) b) Wisley is just down the road and our membership is woefully underused and c) fresh air and space is the perfect combination for an afternoon nap.

We'll definitely be going along to another meet up soon.
Posted by The domestic novice at 23:19 No comments:

Tell me your story 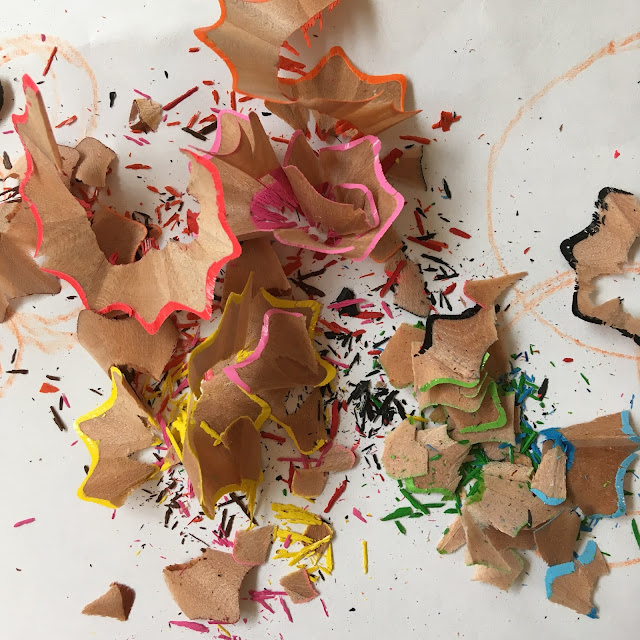 How do you frame your stories? In conversation, I mean, not Instagram. Do you lead with the positive or has the negative become your narrative? Do you ever think about the other person and what effect your story has on them? Do they walk away lighter or burdened? What were you seeking in return for your tale? Empathy? Guidance? Confirmation? I ask only because I had the most insightful, impromptu coffee yesterday with a very wise neighbour who told me a tale, and then retold the tale with a different lens, and did the same again for the lives of two others. As she said, we've all had things happen in our lives, but it's how you choose to tell it to others that counts. And it made me pause. This is one of her tales.

Tale 1:
I had an awful childhood. My father died when I was 8 and I was sent to boarding school. No one told me that my mother had remarried until I was driven home to a strange flat in London because our large family home had been sold. My mother then separated from my stepfather and we had no money, so I had to give up school at 16 to work.

Tale 2:
I grew up in a large house with staff and ponies and had the loveliest childhood. Sadly my father died when I was 8, but I was lucky enough to be sent to a top notch boarding school. My mother remarried, he was a consultant, and we went to live in London, staying in 5* hotels all over the world. When I finished school, I became a model and lived in London. It was so much fun.

It's so easy to lead with the negative, to get that immediate hit of sympathy, but have you ever considered the long term effect? For you? For others? Does it subconsciously colour your daily outlook? Has the story changed incrementally, unintentionally, each time you tell it? Can you remember the original version? I'm guilty of hamming up the negative for a bit of drama, but I also know how draining it can be to listen to the same story time and again where the storyteller doesn't seem able to move on. Don't get me wrong. It's good to get things off our chest, a problem shared is most definitely a problem halved, and it's good to be a sympathetic listener. But how different might your story be with a rosier lens? Could reframing put a spring in your step?
Posted by The domestic novice at 23:01 1 comment: 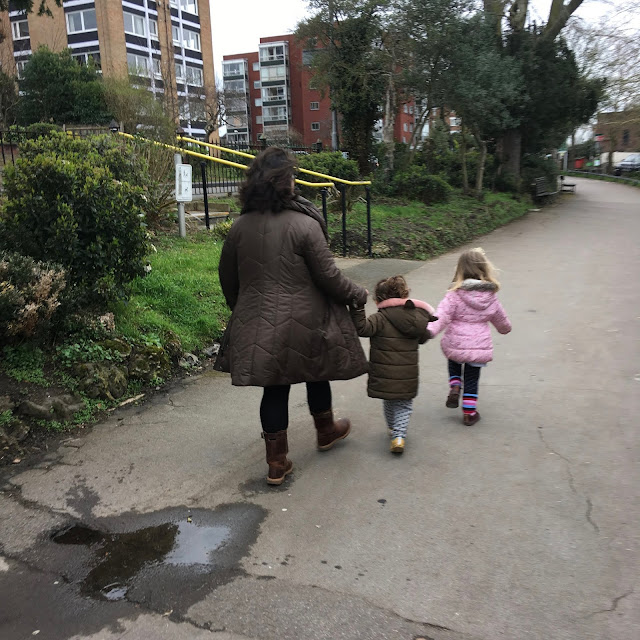 Not the monetary type or a collective of martini-wielding chaps, but friendship. The sort where you simply pick up where you left off a week, a month, a year or more ago. The sort where if time has passed since your last message or call, you've not 'ghosted' anybody, you've just been busy with life and no one got offended. The sort that might have spanned decades or are equally new. The sort that are as comfortable as your favourite jumper, where you can be you, potty mouth and all.

This is Mrs B. We met through the WI a decade ago. Many a glass of red and a world put to rights before kids. Then we all moved. There's now a two hour car journey, an unreliable motorway, a busy diary and four children under the age of 4 between us so we've not made it to their not-so-new house yet. But they were back down in our neck of the woods this week, so we managed to squeeze in a coffee and a catch up, and it felt so wonderfully jumper-like. As I drove my brood to meet Mrs B's brood (you can't see baby M in this photo but she's there in a baby Bjorn carrier hidden by Mrs B's coat), I remembered that the last time I'd driven to their flat was for Mrs B's baby shower three years ago when I was quietly pregnant but not quite ready to share the news. I love this photo of Mrs B shepherding two very excitable little girls home. Why? Because these little girls have only met three times in their three years and became thick as thieves after their initial shyness. And because A immediately took to Auntie B, seeking her out and insisting that she hold her hand. I wish they lived down the road still, but for now just watching this little friendship blossom makes me so very happy.
Posted by The domestic novice at 16:14 No comments: 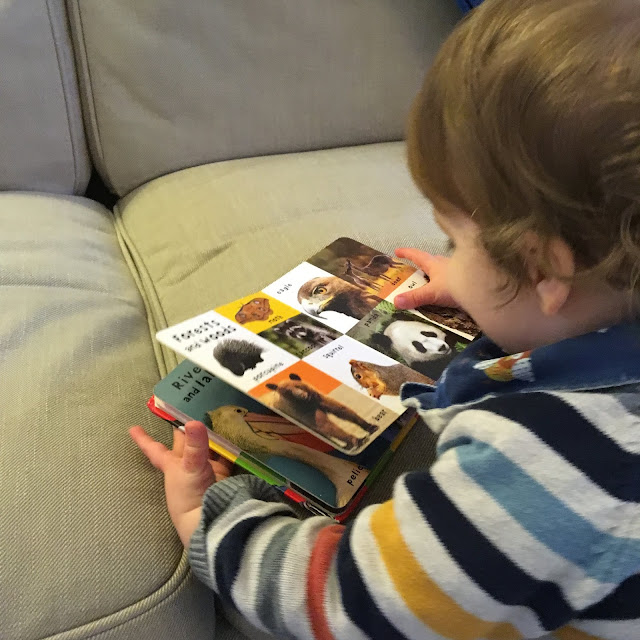 Every once in a while Mr M hops on a plane for business and I'm left in charge of the little ones. I quip that I'm flying solo for the week, but no, that would be Mr M. The countdown fills me with dread, but once we've found our rhythm it's actually ok. And remarkably, both beans were well - if nursery bug tag teaming were an Olympic event, they'd be representing Team GB this year. Even Pig was on her best behaviour. But it made me realise that yes, when we were in the thick of it last year and my hourly mantra was "this too shall pass", it really has, and I now have two little humans who can potter about. It really did get easier.
Posted by The domestic novice at 16:03 No comments:

A snuggle of scones 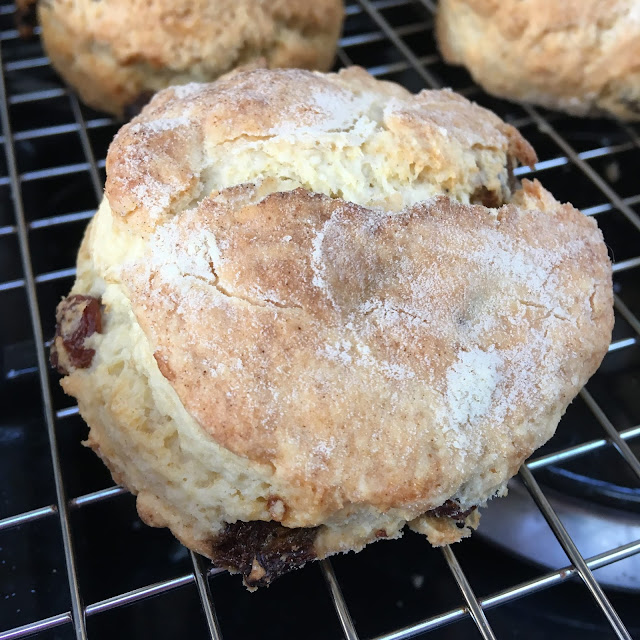 Every once in a while, when the little ones are napping, I'm hit with the procrastinating call of baking. And then I talk myself out of it in case one wakes up or the guilt that I haven't folded the washing kicks in. As a result, I've barely baked since they arrived, so when the baking bug hits I never have the ingredients in. On a whim, I recently bought a bag of sultanas and there they sat on the worktop eager to be used. Not quite Michael McIntyre's pot of five spice, but certainly getting a little downhearted at being overlooked and obscured by the box of weetabix and general detritus.

But today during nap time, for some reason, I decided to bake scones. I do love a scone. There's something so comforting about them - which is somewhat needed with this weather of late. I like mine cold, with all the trimmings and a steaming mug of tea. Creme fraiche instead of clotted cream is rather controversial but a surprisingly good alternative and what's usually in the fridge. The majority of shop sold scones are a tad mediocre - either so dry that they turn to dust as you try to spread them with butter or so cloying that they get stuck to the roof of your mouth. A pile of scones sitting resplendent on a cafe counter will immediately get my hopes up, especially when they're as big as my hand, but invariably they're more rock cake with a bit of height than the Enid Blyton afternoon treat that I was so looking forward to.

Anyway, I've not made scones since I was at school - I always thought that they were a faff to make. Turns out, they're super quick to make and even quicker to bake. I used this Delia recipe - and it's perfect. Naturally I couldn't find the proper cutters, so had to improvise, but the recipe made eight decent sized scones that cooked in 12 minutes. What's not to love! I honestly can't believe I've not made them this century.
Posted by The domestic novice at 16:23 No comments:

A glimpse of green - week 9 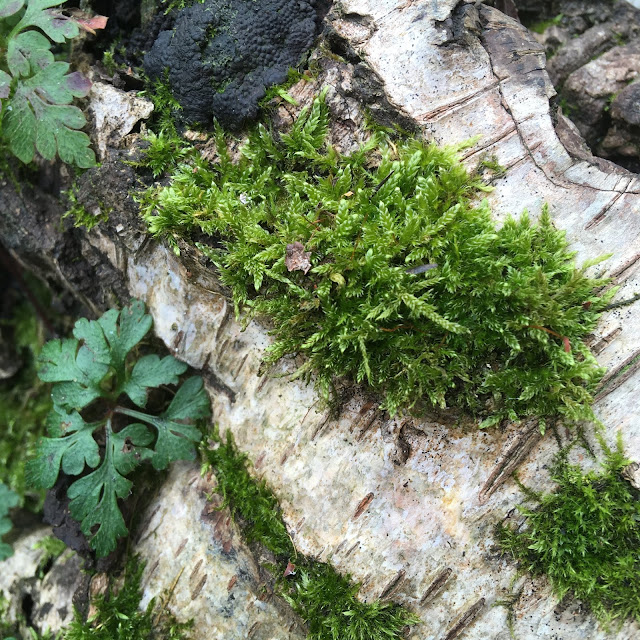 Spring passed me by last year. I simply turned my head away. I missed those first signs of life, the tentative shoots letting slip the hustle and bustle taking place underground in the depths of winter. The joy of new growth - sedum emerging like goose barnacles, hellebores unfurling their gracious necks, the brown paper packaged fireworks of the witch hazel - the latter aside, I often find this stage more joyous than the petals when they come. This week, with it's unseasonal but welcome warmth, sent our garden into overdrive - the Californian poppies have sprung up everywhere, their self-seeding programme is going well. The weeds are already flowering. It felt good to start spring cleaning the garden, gently readying it for two marauding tinkers and their friends.
Posted by The domestic novice at 23:19 4 comments: