Like the household product, the weekend was over in a flash.

Phew. What a busy weekend. We spent Friday reminiscing in Wimbledon at our favourite noodle bar, Slurp, before making our way to a pub for our friends leaving drinks. They're off to the country to pursue an idyllic life in Devon. So, so envious.

Saturday was spent tidying the flat whilst N made the most amazing chocolate tart with a jar of nutella for Mothers Day and prepared for the first BBQ of the season. Yep - 1st March, despite the chill, means it's BBQ time. Or rather bratwurst time! N had nipped to the German shop in North London and picked up some traditional sausages and the most amazing paprika crisps. The North Surbitonites - or Norbitonites* came round and we gorged ourselves on sausages, beer, chicken, veg kebabs and toasted marshmallows - the latter on it's own with cups of tea and coffee - we're so middle aged!

Mother's Day was such a lovely day. Both sets of parents came round for lunch. N cooked the most amazing roast - leg of lamb marinated in harissa paste, fresh mint and garlic with all the trimmings. Champagne, lamb and the fabulous chocolate tart could mean only one thing. An evening collapsed on the sofa from over-indulging on pretty much every level. I could just about muster drinking a glass of water, watching Monty Don and having an early night.

We did have a brief interlude when the Norbitonites popped over to plant some seeds for their allotment. We were already outside getting the mass of plants, that my parents had wonderfully brought for us, into the ground. Admittedly, it was dark. Planting in the dark isn't so much fun. For starters you can't see where the cat poo is. Secondly, the earth obviously gets cold when the sun sets, so every bit of it feels like cat poo. Eurgh. 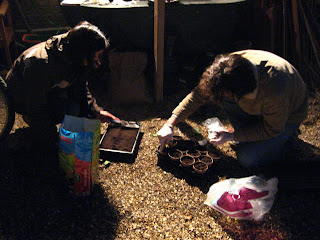 So as 'Flash, a-ah, saviour of the universe' goes, the weekend was duly over. Hello March and hello week. Lots to do, and one wasted evening down. Hey ho.

*before I get into trouble. Norbiton is North of Surbiton, however the troublemeisters don't live there, they live up the hill in Surby - which in our world is North Surbiton - albeit 8 minutes away.
Posted by The domestic novice at 20:27