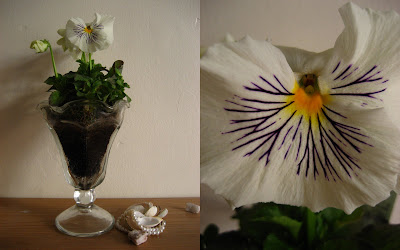 Aren't they just? There's something oddly comforting about that phrase. Like 'the bee's knees'. Both of which perfectly sum up the lovely 'Cats Whiskers' pansy from Mum yesterday. They are rather majestic, sitting proudly in one of Granny's old vases, and their timing was perfect as the primulas are almost past their best.

Hope you've all had a lovely Monday. It's been a blustery day in London along with a couple of spring showers thrown in for good measure. Blue found the catnip that my parents have given us, and decided to tell Grey all about it. The two little monkeys were caught just as they were about to launch a combined attack. Said plant is now locked in the shed until we can plant it out in an area of the garden that won't be destroyed by said monkeys rolling around in sheer delight.

On a different note, I thought you might like the recipe for the scrumptious Mother's Day tart. 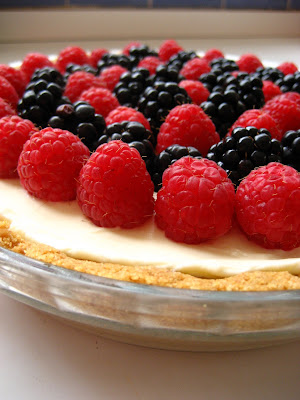 It's based on Nigella's Black and White tart from How to be a Domestic Goddess. I chose not to include the citrus notes (citrus allergy) or the alcohol and went for raspberries instead of whitecurrants. The result? A quick and creamy alternative to a cheesecake, with a hint of vanilla.

1. Break the biscuits into a food processor and blitz until they are reduced to fine crumbs.
2. Add the melted butter to the crumbs and combine.
3. Transfer the mixture to the dish and press into the base and sides with your fingers.
4. Pop in the fridge whilst you make the filling.
5. Whisk the egg white until it is stiff. Put to one side.
6. In a clean bowl, beat the egg yolk with the sugar until pale. [My mixture resembled a small ball of sugary dough].
7. Add the mascarpone and beat until smooth. Stir through the vanilla essence.
8. Fold in the egg white.
9. Dollop the mixture into the digestive base. Using a pallete knife or spatula, smooth the mixture out.
10. Add the fruit in an arty fashion and pop in the fridge until you want to make your grand entrance. Alternatively, grab a cake slice and a plate, and don't tell anyone that you've made it...
Posted by The domestic novice at 18:16