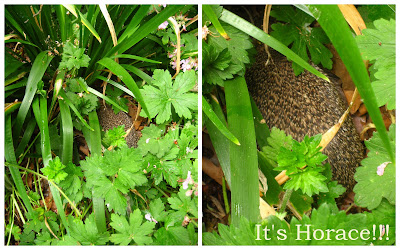 He's a little shy, but he (or she!!) is our resident hedgehog. I was sitting outside having lunch today, drooling over the cake recipes in the latest Waitrose magazine, when the flower bed behind Mr M's raised vegetable beds began to rustle. I thought it was a dratted Terry (aka common grey squirrel or Squirrel Nutkin - which naturally led to Terry Nutkins...) so I nipped over there to shoo him away. I was thrilled to find that it was in fact Horace tucking into the slugs and snails that appeared overnight with the rain. As Mr M was at work and unable to witness said brilliant munching feast, I raced back to the flat to get my camera to take a few shots. Which aren't so great. Because he suddenly went very quiet and I didn't want to put him off his food. I watched from afar as he trundled his way through the undergrowth, like a prickly bulldozer, sniffing out tasty treats. It's brilliant to know that we have hedgehogs living at the bottom of our garden. Oh, I do hope they've had hoglets. How adorable! The little fox cubs ventured onto our lawn last night to play - so sweet. They bounce! It does also mean that we need to start staking our plants to protect them from the frolicking fox cubs.

Horace's lunch did mean that I had to have a 15 minute interlude of stick entertainment for the cats, who had emerged from various bushes to find out what was rustling. Cats - plural, because Miss P has finally learnt to tolerate the two cats from next door. She didn't really have much say in the matter as they are just so very eager to play with her and follow her around everywhere.

Do you name animals? We've always done it. The parakeets are called Percy. Every single one of them. Regardless of gender.

Posted by The domestic novice at 17:03