Even if you have only just turned one, all good Rock Stars know that image is of paramount importance.*

With left over paint from Miss P and the overwhelming urge to make my own stencils (I blame Lena Corwin), I embarked on a mission to find the mysterious 'freezer paper' that our friends across the Atlantic use when making beautiful, one off images on bags, t-shirts and tee-towels. Having tried 3 supermarkets it finally dawned on me that we just don't have it.

As I pottered about in one of those 'has everything but not that' shops, I stumbled across self-laminating business card holders - aka sticky backed plastic. 'That'll do' I trilled out loud.

The useful part of the self-laminating kit is that the sticky plastic has a paper backing, which meant that I could hand draw my design directly onto the paper and then cut it out with the scalpel knife. It also has a non-sticky plastic back which is great for preserving the 'stick' after the stencils have been used. 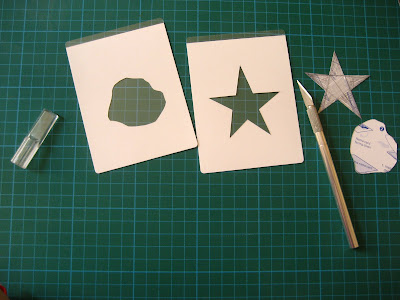 A cheap car sponge was chopped up, and the stencil stuck in place. A paper plate was found for paint dabbing and a couple of layers of paper put inside the t-shirt to stop over-eager stenciling seeping through. 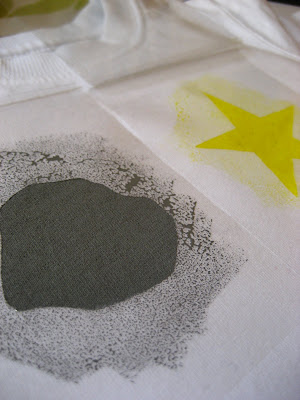 In a matter of moments the job was done - which was a little sad because I could have quite happily stenciled all afternoon. Note to oneself for next time - conveyor belt stenciling!

Once the images were dry, the stencils were removed and the fabric paint set with a hot iron and a handy tea towel. To soften the set fabric paint, I popped it in the washing machine on a normal cycle. 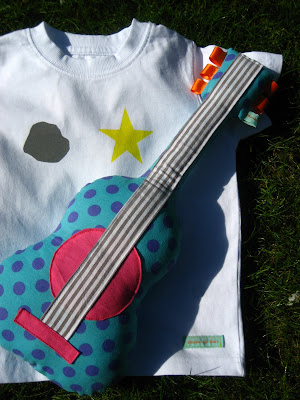 Voila. Ready for the battle of the bands! Coming to a nursery near you...

*So maybe the literal route isn't that rock star, but it made me giggle. One of the first guesses was 'cloud star', swiftly followed by 'storm star'. Sigh. Never mind...
Posted by The domestic novice at 11:00

Email ThisBlogThis!Share to TwitterShare to FacebookShare to Pinterest
Labels: Craft