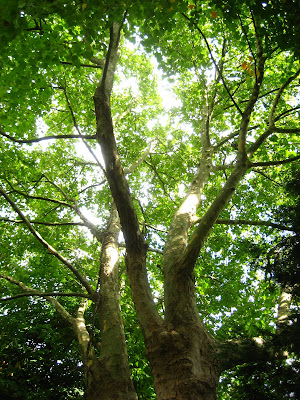 Once upon a time there was a little grey squirrel called Terry. He had four sisters called Terri and five brothers called Terence. He was called Terry because he was the youngest. He lived in the family nest with his father, Terence Senior MXII, and his mother, Terri Senior, at the top of the oldest and tallest London Plane tree in all the land. It was so old it had a TPO**. Terence Senior MXII had told Terry that it stood for 'Terence Property - F-Off!'. The F was silent.

The TPO had been such a success over the years that the tree had been home to many Terry generations. The downside to being so high up was that they had to share part of their tree with the crows who were incredibly noisy. Terry found that if he curled up into a little ball he could stuff bits of his tail into his ears to block out the foul language that came out of the crows bills when one or other had come home past their curfew or nabbed a piece of toast that someone had already called dibs on.

The tree was perfectly placed in a garden surrounded by other trees providing Terry and his siblings with the worlds biggest climbing frame. It was incredibly good fun to run without thinking, helter-skeltering down the tree trunks and back up again. Terry had only fallen once and luckily no one had seen him because they would never have let him hear the end of it. 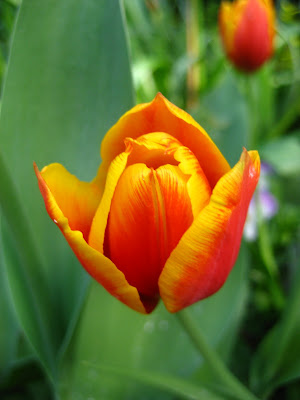 The garden below was constantly being planted with new things. Terry had a long list of favourites - roses, sunflowers, crocuses and snowdrops - but his absolute favourite had to be tulips. There was a plentiful supply of vegetables. Terry wasn't too sure about the Kohl Rabi but had to nibble it every so often just to make sure that he didn't like it. The celery and courgettes had to be the tastiest in his opinion, although his brothers preferred the beans. He found them a bit stringy. He was also quite partial to the nuts and seeds that were knocked on the floor by the crows and quite enjoyed nibbling the conkers and ornamental plums, although the latter did tend to leave his paws rather sticky.

It was quite fun to sit on the veranda, plucking plums off the tree and watching his siblings rush around. They could jump quite high and looked a little like the remote controlled car he'd seen the children playing with in the other garden - but they had a dog so he only ever spied on them. Sometimes his siblings tried to jump over the plastic thing that was at the bottom of the bird feeder by jumping off the bench or the little tiny greenhouse that had very hot chillies in them - he'd nibbled the tip once and it took several days for the feeling in his lips to come back. He knew that there was no point trying to get onto the bird feeder - he'd already tried and he'd slid down the pole that was covered in grease. It took ages to wipe it off.

He was so absorbed in nibbling his sweet, sweet plum without getting his paws sticky whilst laughing at his siblings that he didn't hear Miss P creep up behind him. Then it went black.

<>     <>     <>
Miss P caught little Terry Nutkins yesterday. He wasn't so little. She didn't think she'd be able to catch him. She had wiggled her bottom at lots of other squirrels and they usually scurried away to a high place where they could shout obscenities at her for hours. And although Beef and Carrot was on the menu and one of her favourites, she just couldn't help it. He was rustling you see.

<>     <>     <>
As many of you may know, we have a continuous battle raging with the grey squirrels in our garden. The large number of trees has meant that they have been able to make their own treetop colony to rival the Ewoks. The once 'ahhh, look a squirrel', swiftly turned into 'argh, bloody squirrel stop eating our rose/maple/sunflower/courgette/bean/broccoli/lettuce/chard/celery...', they have eaten literally hundreds of pounds worth of plants over the years. We have the furry grey equivalent of teenage gangs loitering in our garden, looking for trouble - they probably carry knives, for dining that is. Our garden is policed by 9 regular feline coppers, all of whom take a keen interest in keeping the grey hoodies at bay along with a lot of bottom wiggling, but that's as far is it goes. One or two have got close enough to get a mouthful of tail fluff but nothing more. Miss P has astonished us with her patience. She will wait for hours to catch a frog. Frogs I can cope with. She never kills them nor brings them inside. And more often than not, she can be distracted whilst I scoop the shrieking frog up in my gardening gloves and take it on a small vacation to the end of the garden. I don't know who was more shocked yesterday - Pickle or me. Sadly Terry didn't make it and went to a place where the plums and nuts and tulips are plentiful.

*Obviously not the real Terry Nutkins. He inspired us to love nature when we were small and I guess on some subconscious level the name was the natural progression from Squirrel Nutkins. We're not wildly inventive. Every squirrel is called Terry.
**Tree Preservation Order - which often means a lot of to-ing and fro-ing with the Council each time the tree needs to be thinned.
Posted by The domestic novice at 14:55