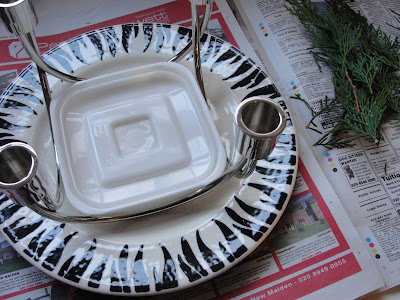 Mr M - I want an advent crown this year
Mrs M - Ooooh, with wire hangers, tinsel and candles like Blue Peter
Mr M - Huh?
Mrs M - You know - plastic, sparkle and flame hanging from the ceiling.
Mr M - I don't know what you're talking about. I didn't really watch Blue Peter when I was younger
Mrs M - WHAT?! What were you doing?
Mr M - I dunno. It's got to have red candles.

Fast forward to Saturday - battle weary Mr and Mrs M fight their way through hoards of shoppers to M&S to pick up an 'investment piece' for the advent crown. A sigh of relief when said candle holder is spotted and purchased.

But where are the red candles? M&S - no. Clas Ohlson - no. *Sigh*. Back to John Lewis where Christmas fever has broken out. Mr M admits defeat and removes himself from the narrow candle aisles leaving Mrs M to grit her teeth in the queue as her legs are gently knocked for a whole 20 minutes by some oblivious shopper who has entered the lack-of-spacial-awareness final phase of Christmas fever. 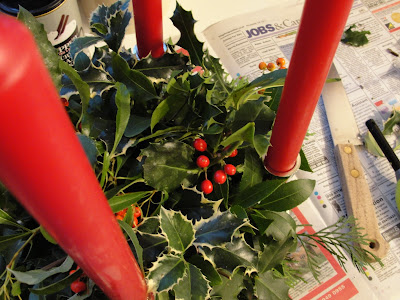 This morning we bought a block of oasis from the lovely florist next to Waitrose (where they had advent crowns for £45!) and then spent the afternoon finding greenery and the odd berry that the birds hadn't found in the garden. They don't appear to like pyracantha. 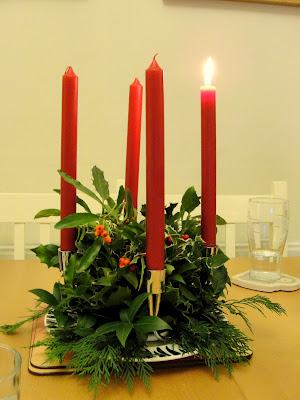 A festive pile of green. I think Father Christmas will agree that a flower arranging course is in order...

Have you got an advent crown? How did you make yours? Did it involve wire hangers?
Posted by The domestic novice at 17:39