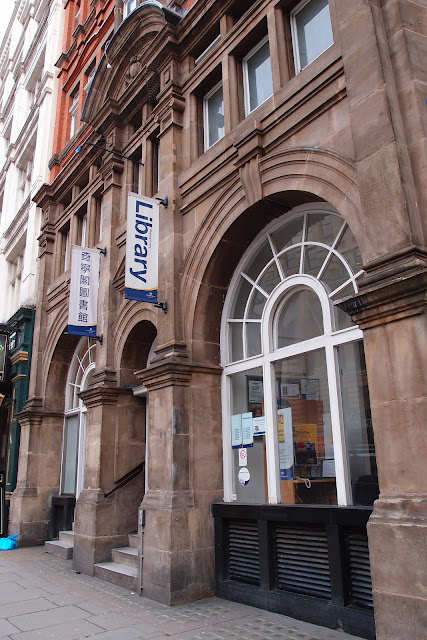 When was the last time you went to your local library?

For me, it was probably last year. Why? Because I'm lazy. It's in the opposite direction to the flat, on the other side of the tracks, up the steepest of hills. My charity book habit is also to blame - my bookshelves are teeming with unread pages - making it difficult to justify to myself and Mr M why I've brought home six more books that have to be read at vast speed to avoid the 40p fine.

Despite my lack of attendance, I am utterly sentimental about them. Every Friday when I was small, my family would go to the library after school to choose our books before heading home for bangers and mash and a new story. There's a certain airlessness, a moment suspended when you enter through the doors. My grandparents lived in a little hamlet and would be visited by a mobile library. A Postman Pat affair, it would throw open its doors, revealing words, prose and pictures for those hidden from the main A roads. It was a lifeline before the internet, Kindle and mobile phone.

So why the decline? In an age of austerity, and the surge in allotment holders, surely libraries would be next on the success list. I know that charity bookshops and online sellers are driving small traditional bookshops out of business, but are they hitting the libraries too?

Is it because we're all looking for the most cost effective and time efficient read? I for one confess to scanning our charity shops for my monthly book club read before hitting Amazon. It's only if I've left it to the last minute that I go to a bookshop - and even then I still baulk at the £7.99 hit.

Or is it because we're increasingly becoming non-readers? The number of friends who tell me that they've never enjoyed reading, that they don't have time or were put off at school seem to be all the more common. My friends sit very firmly in one of two camps - those who do and those who don't.

I was, and still am, a bookworm. I've often wondered if it had anything to do with the large age gap between me and my sister. She's the same. I would lose myself in a book - a quick, easy and quiet way to entertain myself. Swallows and Amazons, The Famous Five and Nancy Drew were all read in a tent in the garden or under the bed covers with a torch.

Finding time to read is increasingly difficult - my short commute, laptops that are on until we go to bed, a weekend to-do list that never seems to get much shorter. That said, I do try to read a couple of pages before I turn out the light.

Yesterday I ventured into Charing Cross library. A doorway I've passed numerous times, I only noticed it the other day. It wasn't buzzing, but there was a definite hum of activity - browsing, checking in, checking out.

The long and short of it is that it would be a travesty for our communities to lose their local libraries. A safe environment for children to learn and explore, somewhere for those out of work to access facilities that they may not have at home, a place that has the latest fiction, cookery books that you can use before forking out for them if you like the recipes, DVDs to rent. And all for free!

The Evening Standard Get London Reading Campaign is gathering momentum. If ever there was a time to keep our libraries going it's now.

How can we drive more people to use them? Would a cafe work? Meet a friend for a cuppa and a browse. More late night openings - in a similar vein to the V&A Lates? Could we donate our books to reduce costs Most of the secondhand ones in our charity shops are as good as new. Could publishing houses twin with a library? Or can we just point out to people that if they don't use them, these beautiful (and some not so) buildings will end up standing empty as a piece of history?

The WI campaign this year is Love your Libraries. There is a Government petition that you can sign and a National Libraries Day on the 4th February.

How are you going to Use it, Love it, Join it?
Posted by The domestic novice at 23:48