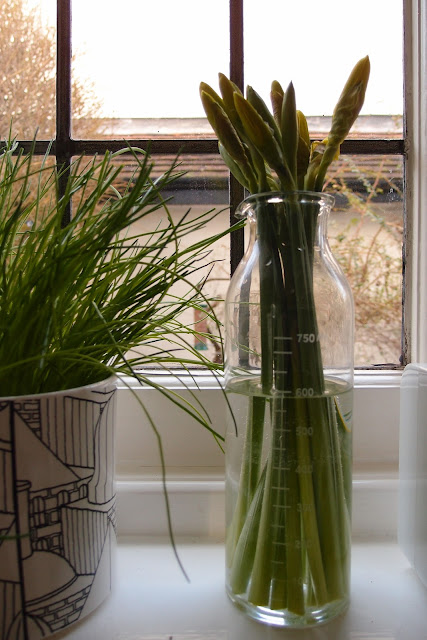 My first of the year from the lovely Kate. I've popped some of them on the kitchen windowsill alongside the herbs. The rest of the ginormous bunch are in a large pitcher in the conservatory.

Hope you had a lovely weekend. Kate and her hubby came for lunch - Mr M cooked Jamie's pork tacos (not quite so 15 minutes, but delicious none the less) - and we talked houses, our grand plans and theirs. I had a go in the new car - I've not driven for yonks, so it was a little nerve-wracking but fine. Automatics are just like driving dodgems, aren't they? We're going to hit the busier roads next weekend - gulp. Mr M laid boards in the loft and discovered even more wasp nests and I found wallpaper that might work in the cupboard toilet - what do you think? Miss P discovered the duvet as it aired and created her own nest. Lovely. Can you believe January is almost over? Where has it gone?
Posted by The domestic novice at 22:21