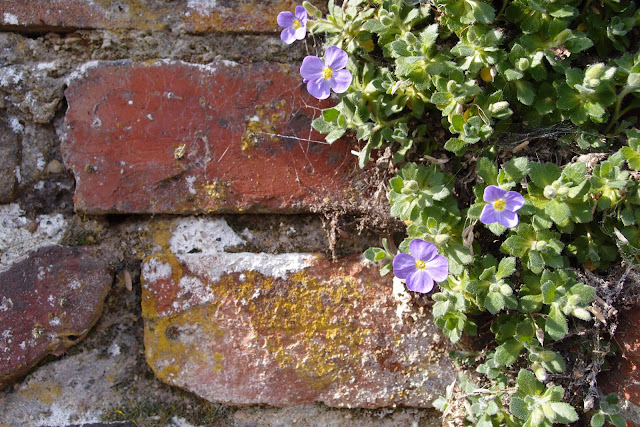 There have been some glorious days this month that just cried out for short sleeves and sandals and sunglasses. The daffodils and tete-a-tetes have replaced the snowdrops and crocuses, the primroses are quietly creeping along the base of the front wall as the aubretia flows from above in a pale lilac-y blue cascade.

Alice is developing at a rate of knots. I can't believe that she's 10 months old tomorrow. She's found her forward gear and is now crawling. She's starting to pull herself up to stand so her cot has now been lowered. She now naps in the cot during the day which is frankly a revelation - you can do so much in an hour! She slept on her front for the first time today. She's developed a love of grated Gruyere cheese and follows The Gruffalo's Child with her finger. Her little personality is starting to come through - cheeky, wilful and loving. She does the most adorable cuddle. She's now on two bottles of formula a day in preparation for nursery. She chatters away to the kitchen flowers (subscription flowers are honestly one of the greatest gifts to receive) and the plants outside, and shrieks in delight at Pickle. My heart swells to the point that it feels like it will burst, and yet it swells more.

As for me, I'm trying to enjoy every minute because it won't be long before I'm back at work with someone else earning her precious smiles and cheeky glances and dirty giggles. I'm not going to lie - it's been hard - some days are brilliant and other days are seriously tough. There are days with tears. There are those where I have to dig deep and patience is lacking. I can't/shouldn't/mustn't complain because she sleeps through the night and is a delight by day. I blame my hormones, frankly - they still haven't quite settled back down to 2015 levels. And perhaps a large dose of unpreparedness. I'd spent such a long time wanting/hoping/trying to have a baby that the focus was only ever to get pregnant/stay pregnant rather than the 'ta-da you're a mother' bit. Perhaps deep down I thought that the sheer amount of wanting Alice would automatically make me brilliant at mothering. Ha! I had no idea that it was such a bloody tough gig. Hats off to my friends who always appeared to be acing it in the early years. With all that said, I love where we're at right now and I go to bed each night knowing just how fortunate we are.

What motherhood has taught me so far:

Posted by The domestic novice at 23:42