And what a peculiar Easter it has been. Firstly, it is incredibly early. Apparently, the first Sunday after the full moon that falls on or just after Spring Equinox (March 21st) is fixed as Easter - so it is the earliest it can possibly be. Secondly, the weather has been so unpredictable. Snow, sun, high winds, hail and rain - often in the space of a couple of hours. And finally, when we woke up this morning, it felt like Christmas Day. I have no idea why - particularly as there was a Grand Prix zooming around on the television.

Despite the peculiarity, we've had a smashing Easter. We blustered our way to Berkshire on Friday to see my parents for some scrummy homemade soup and to introduce N to my favourite plant nursery, Stubbings. We were on a mission to pick up some plants to fill some big spaces of earth in our garden. We do struggle with our garden at times. It had been dreadfully neglected before we moved in. We set about in the Spring of 2006 de-weeding, chopping, taming wild garlic and relocating frogs. N has played a far larger role in the garden than me. However, I am keen to discover my greenfingers - I must have a little green hue as both parents are landscape gardeners! So, we braved the high winds and stocked up on plants such as Mahonia Japonica, Hellebores, Hebes, Bleeding hearts and Ajura to name but a few. Both of us were rather taken with the full size olive tree that they had for sale - a snip at £4,000!!! And before we left, Mum poked around the sewing machine and managed to get the feed dog back up - marvellous. On the drive home, the clouds looked as though the end of the world was on the horizon. In fact, it only took 10 minutes and we were smack bang in the middle of a hail storm - it chased us all the way home.

Here's a little weedling reminding us that despite the madness of the weather, they still think it's Spring. 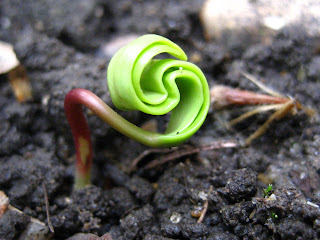 We spent Saturday in Kingston picking out birthday presents for N's brother and checking out new laptops as mine is about to die. I would love, love, love to buy a MacBook Air by Apple - it is just too divine. However, that would involve winning the lottery (and buying a lottery ticket...). I have however spotted a Sony Vaio which has my name written all over it plus a more realistic price tag. We then sheltered from the grotty weather in the Gourmet Burger Kitchen. Yum, yum, yum. A scrummy burger (N had boar) and a beer or two later and we meandered back to the joys of the Surbiton Waitrose on an Easter Saturday. Just too much fun...
Posted by The domestic novice at 20:47