Gosh, what a productive day I've had and it's only just gone 3. That might sound like a rather silly thing to say but since becoming an unemployed statistic, trying to maintain a routine has been quite a challenge at times. I had a long ol' list this morning and, by George, everything got ticked off.

First stop was a local college where I signed up for a week long course on Project Management which I start on Monday. It's a fascinating place, established in the 1920s for working women and based in a listed building which is just stunning. Next was a quick browse along the shelves of the local library - where to my amazement I was able to pick up some fab craft books (here and here on Amazon if interested). More on these beauties once I've picked out what I want to make! 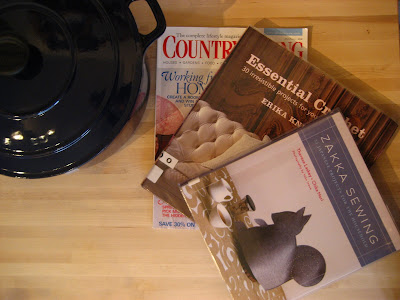 Chuffed with my finds, I popped to Waitrose to pick up some essentials, including the latest Country Living magazine as my subscription hasn't yet kicked in. I'm looking forward to following their 'Earn a country living' series - I'm in desperate need of inspiration together with a large glass of escapism!! A petite bonjour at Chez Julienne for another cafe au lait (addicted...) and then home via a gem of a charity shop. And look what I found hidden behind some particularly ugly wine racks!! 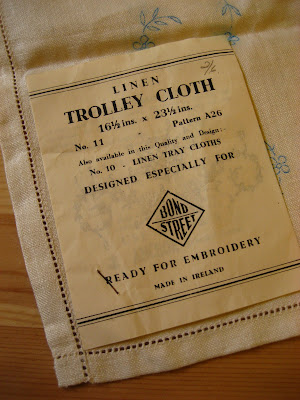 I have wanted to have a go at embroidery for simply ages and what better excuse than this. It's small - which is just perfect for a beginner - and it was only when I got home and took it out of its bag that I realised that the original instructions were attached and it was as good as new. I just love the typography. Now, all I need is a trolley...and some thread...
Posted by The domestic novice at 15:11