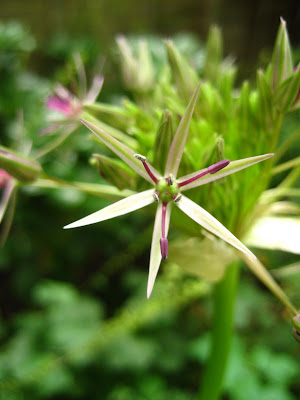 Why, hello! Hope you had a lovely weekend - we spent ours lapping up the sun and dodging the clouds swollen with rain. We also discovered a new allium in the garden - Mr M thinks he may have planted it because I certainly didn't. Either way it's beautiful and flowering just when the Purple Sensations are starting to swell with seed. 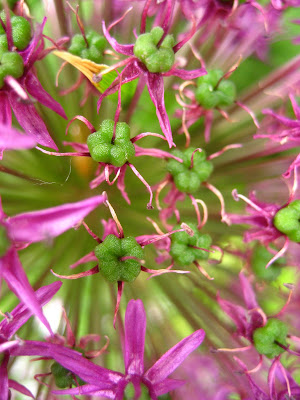 It's been a jolly old Monday - I cycled into town this morning before the sky became too stormy to get a few bits and bobs for my trip to Barcelona. Oh yes, my favourite city in the entire world. Mr M proposed there knowing just that. And I'm off there on Thursday with some of my oldest friends to celebrate Miss C's forthcoming nuptials. Plans are coming together and I am beyond excited. Tapas, cava, architecture, sea, Gaudi. What's not to love? Well, the rain that's forecast - but we're overlooking that for now.

Speaking of Miss C's wedding - I may have bought a new dress for said wedding this morning. This was not 'part of the plan'. I was meant to be wearing the green party dress, but I tried it on over the weekend and it's proving a little risque up top. And as I'm doing a reading during the ceremony (petrified!), I don't really want to be wearing a dress that I want to hoik up half way through...not a great look to burn to DVD for an eternity. So, the new dress. It's ever so nice. It's from Coast - so I will put money on there being at least one other guest wearing it. I shall get a snap of it tomorrow to share!
Posted by The domestic novice at 21:47