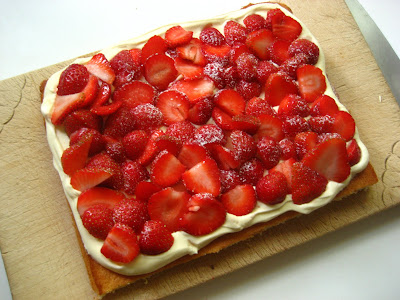 And with Wimbledon (and the football and the cricket) playing in the background it would be rude not to. Particularly when you've picked the strawberries yourself (we didn't leave that many behind at the PYO farm on Monday). You can't beat it. 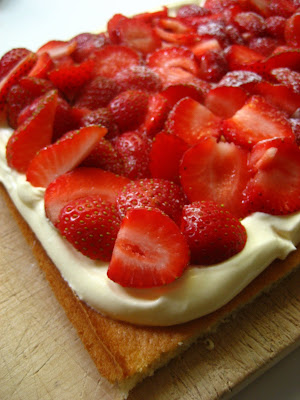 Or can you? Why, yes. I believe you can. By having said strawberries and cream on a vanilla sponge base. Oh my. So pleasing.

Sponge base - serves 8
125g soft butter
125g caster sugar
125g self raising flour
1tsp vanilla essence
2 eggs
3-4 dsrtspn milk
Creamy mixture of joy - to cover 1/2 of the above tray bake. Serves 4.
142ml double cream
2 dsrtspn Greek yoghurt
A little icing sugar (I use a funny tea strainer thing as my sieve because I'm lazy - probably equates to roughly 1 tsp)
2 handfuls of strawberries - chopped
Comedy fact. We - yep, Mr M and moi - thought we could eat all of the above in one sitting. Clearly an eyes bigger than stomach moment. And I had divided the sponge base in two - with the spare half popped away for another day. The photo shows the half that we thought we could polish off. We were defeated. Half of it has gone in the fridge for tomorrow. I reckon if you double the topping recipe, you'll be able to feed 8 quite happily.

Clear as mud, eh? Tasty mud, mind you.
Posted by The domestic novice at 21:01