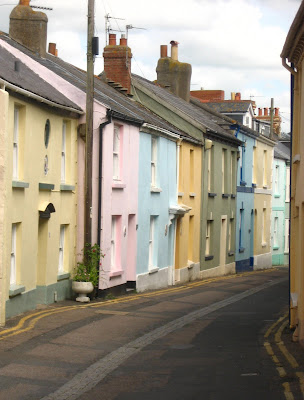 Stories of smuggling, seagulls, shades of pastel...the first half of our week in Appledore was just dreamy.

My parents had booked Curlew Cottage for a couple of weeks so we drove down to join them. The long drive wasn't as ghastly as we'd always imagined it would be (just over 4 1/2 hours) and we dined on the obligatory car journey sweets - Starburst, wine gums and fruit gums - that Mr M had popped in the glove box. That said, we still got stuck going past Stonehenge and the pigs - seriously people, we all know what the stones and pigs look like, no need to slow down to check that they're still there.

The gentle pace of life in Appledore was just what we needed. Irsha Street is just wide enough for one car and people are used to waiting. We waited behind a fisherman as he loaded up his car, marvelling at how much he could get into the boot including the boat motor! It was so refreshing to not have a queue of irate I'm-ever-so-important-I-must-get-through city folk gesticulating and honking behind us. 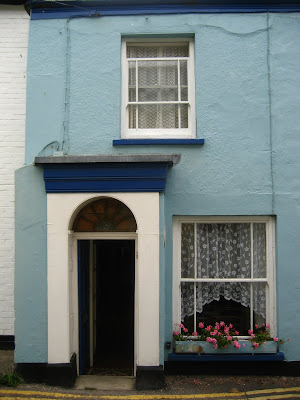 We pulled up outside the house to unload the car - for two of us we had a ridiculous amount of stuff - and got our first glimpse of the little, wonky cottage. If you look closely at the planter you'll be able to see the little beach huts. Lots of the planters along the street had different scenes - oyster catchers, boats, fish - just charming.

A lot of the cottages have two doors - a heavy front door and then a second glass door so that when you're in, the front door can be left open and the light can stream in through the second door. The added benefit is that it makes all of the cottages feel incredibly welcoming as you walk along the street, listening to life running its course and helps satisfy that nosey gene that I know many of us share. 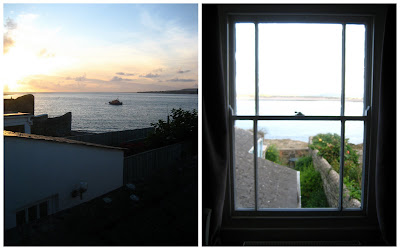 The other two bedrooms are up here too along with the locked door to the room in the roof. As an aside - what is it with locked doors? I always have to try the handle even though I know it's locked. 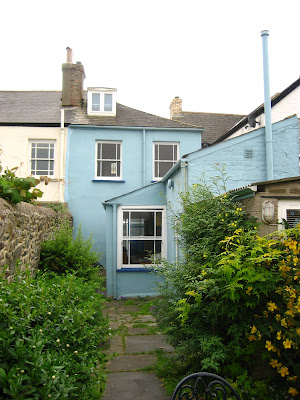 The cottage is full of little hiding places and oddities. Rumour has it that the locked top room was used as a smugglers look out. The strange little cupboards would certainly have been useful for storing the hoard. Most of the cottages would have had steps down to the estuary - perfect for spiriting away secrets in the dead of night. You can still see some if you hang over the end and peer along the estuary wall. 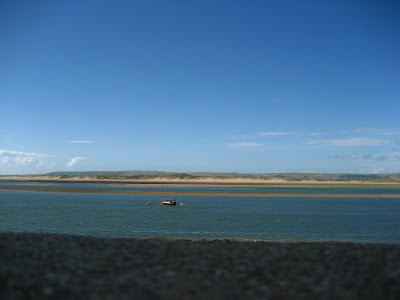 There's something hypnotic about having this view at the end of the courtyard. We ate lunch overlooking the estuary each day, watching Mr and Mrs Blackbird fly in and out of their nest in the bush on the left. We would have had dinner out there too if it hadn't been so chilly! 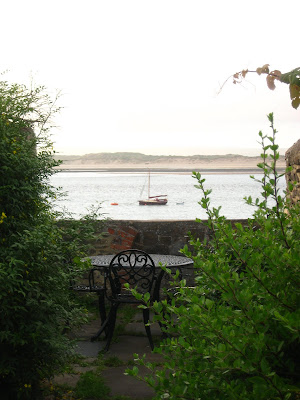 Needless to say, my first night was filled with dreams of smuggling, treachery and a dash of Daphne du Maurier.

Irsha Street is full to the brim with prettiness. Which is probably why the majority of houses are holiday lets or second homes leaving only 21 permanent residents. We came upon this pretty country cottage. It almost looks out of place with no green field or gentle lowing of cattle. Mum and I were remarking on the stunning climbing rose over the doorway and the owner very kindly gave us one of its blooms. 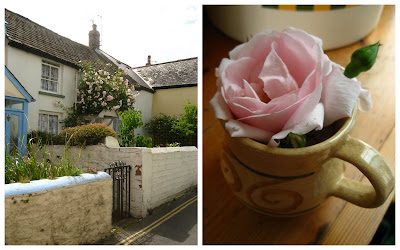 Each time we walked along Irsha Street we noticed something new. Whether it was an interesting house name, an odd brass door knocker or an almost hidden passageway to the estuary. 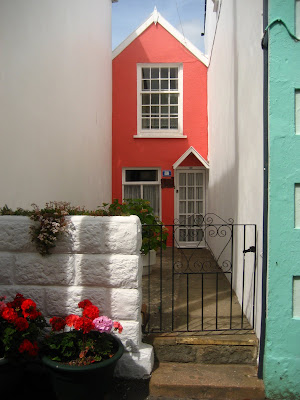 This little house is rather appropriately named The Doll's House and is apparently a tiny tardis, tucked in between two rows of cottages. It's available to rent - hard to believe it sleeps 4!

So, that's Irsha Street. Our first time there and we can see why my parents love staying there and keep going back albeit to a different cottage each time. So, just 274 more photos to go...I hope you don't mind a little dose of Devon each day.
Posted by The domestic novice at 17:30