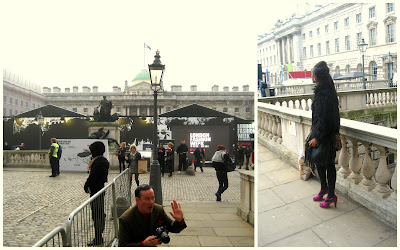 One of the things that has been keeping me rather busy at work recently has been London Fashion Week. I still can't quite believe that I have just spent the last couple of months dabbling in the fashion world - photoshoots, fashion designers, an awards do, the whole airbrushing debacle. I have always had closet fashionista tendencies - trust me, you certainly would have no idea if you were to meet me. My career path however has never veered in that direction, until now - and it is by no means the entire part of my day job, but it is a very nice way to spend part of my week and I am enjoying every minute.

LFW began today at a rather chilly Somerset House on the north bank of the River Thames. We were attending a breakfast for a little hobnobbing - or in my case, people watching and pain au chocolate. Rather unexpectedly we were taken, sans tickets, into Paul Costelloe's opening show. As we were whisked past the very long queue of some very serious fashion types, I must confess that inside I was squealing with excitement. I was like a child in a sweetshop.

We found space on a bench and settled down for a little more people watching, spotting Hilary Alexander in a fabulous feather collared coat and rather randomly Evan Davis from Radio 4.

It was fascinating watching the photographers snapping the front row alumni, the chaos before the calm, the rolling back of the cloth to reveal the runway signalling that it was almost time, the lights going down, the photographers moving into prime position for the show. Then the music began to roll.

First down the runway was Costelloe's daughter Jessica with the most beautiful red hair wearing a stunning tailored tweed coat and a radiant smile. The show had begun - the models marched down the runway in time to the beat, some super skinny, some not so - all wearing vibrant tartan, tweed and metallic outfits with a sixties swing about them - oh and the craziest red frizzy bobbed wigs. My poor little camera didn't stand a chance with all those big flashes... 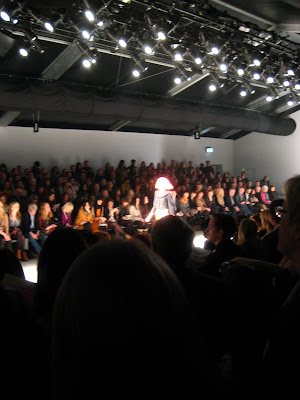 And after 8, maybe 10, minutes - it was was over. Applause gave way to the scrum making for the exits - off to the next show. There are shows being held in numerous places so flat shoes are a must if you're walking. Clocking the skyscraper heels, I'm guessing quite a few weren't... 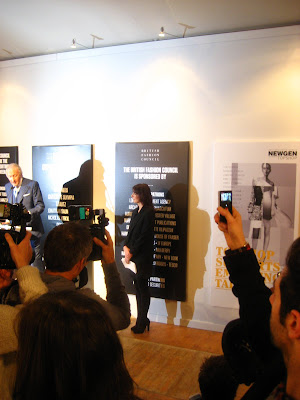 Next stop was Harold Tillman officially opening London Fashion Week followed by Samantha Cameron in her new role as Ambassador for the British Fashion Council.
I can't begin to describe the buzz in the venue - it makes your finger tips tingle. I was very well behaved considering I wanted to grab the nearest person and say 'Isn't it amazing! Can you believe we're at London Fashion Week?!', which considering I was standing next to Anya Hindmarch probably wouldn't have gone down well. It was a bit of a shame that we had to go back to the office as I could quite happily have sat in a corner and people watched all day. The glass of champagne in the hand by 9:30 was rather a nice touch too.

Don't worry though - Mr M will keep me grounded.

Although I must confess that I did buy a 'trendy' outfit today as I'm going to two more shows on Monday...

...oh dear.
p.s. Do you remember this post? I've finally managed to fix the pictures. The carnage is now far worse.
Posted by The domestic novice at 00:22