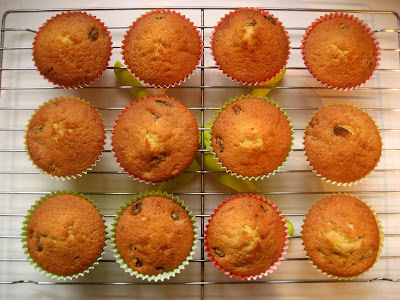 I'd forgotten how much I like sultanas. I'd had some lurking in the cupboard following that delicious carrot cake and decided to throw them into the standard fairy cake batch for tea with Mrs R and Master R on Saturday afternoon. Drizzled with Royal Icing, they were scrumptious. One bite and I was transported back to my Grandmother's kitchen, delving into her larder - a deep cupboard at waist height under the stairs - that went on and on, and always had a cake or two waiting to be nibbled.

How was your weekend? I went to a jumble sale - something that I haven't done in years. Times have changed - I'm sure we didn't used to queue or that people were quite so rude, but I still managed to get a nice pile of books and a couple of shirts for bunting. On Sunday, I finished Miss L's wedding invitation and made hot sausage sandwiches for Mr M and his friends after their Thames cycle ride - training for London to Brighton has begun in earnest. Miss P spent today rolling in dirt baths - she still feels a tad grim and sticky despite several brushes and 'washes' - and judging by her licking face she's regretting her choice of bath too.
Posted by The domestic novice at 23:19