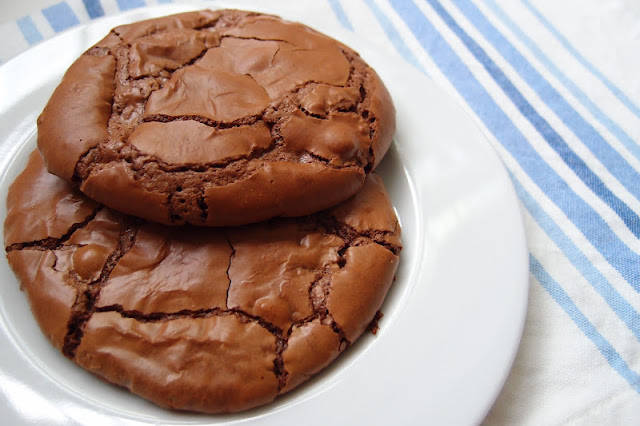 As part of our 'getting our world back on track' we had a wonderfully indulgent bank holiday. On my list of indulgences - baking. I can't remember when I last baked something decadent. There was a comedy moment when I declared that I would make a coffee cake, only to discover that we were out of walnuts...and self raising flour...and the ingredients required for disgustingly wonderful icing. At least we had coffee...

So...next best thing - double choc chip cookies. Slight grump set in when I realised that the recipe I usually use is in storage, but the Hummingbird cookbook was to hand - and having never tried anything from it for fear of coronary disease, I had a moment of 'when in Rome' and got cracking. Not bothering to read the recipe properly I melted the butter and chocolate directly over the heat - apparently it should have been done over some boiling water - oh well, it was fine. Minor interlude to check that the mixture should really be that runny and that it wasn't one of the infamous typos. Nope - sloppy is the way forward, so with slop liberally distributed between two baking trays, they were popped in the oven for 15 minutes until glossy and starting to crack.

Verdict - indulgent and delicious. Crispy on the outside, chewy in the middle. Some are as big as a side plate. Recipe can be found here.

Other news - have rediscovered my sarcastic Wii Fit. Slightly achy from flapping like a bird and being a bit gung-ho with some of the slightly harder yoga poses.
Posted by The domestic novice at 18:23