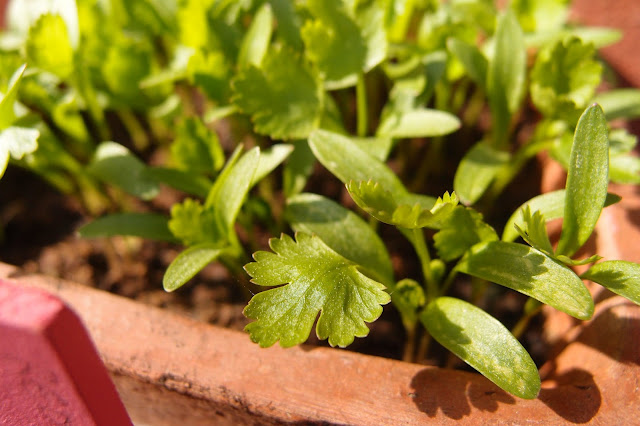 We've grown herbs properly, from seed, for the first time this summer. The coriander has been the leader of the pack, with the parsley hot on its heels. Hot being the operative word, as 'micro' coriander packs a punch! The rosemary, thyme and oregano were bought as plug plants and are thriving in the sun. We're flinging them into everything we cook. Rosemary in a smoked salmon omelette adds a surprising element of heat. Thyme and rosemary boiled with various vegetables add a gentle flavour. Thyme flowers added to a standard dressing give a certain je ne sais quoi to salad leaves. Mr M 'saved' a shop bought mint plant that was about to be relegated to the council compost by popping it outside - it's now romping away. Minty new potatoes with lashings of salted butter are really rather divine, as is fresh mint tea.

My mission is to grow one of those fantastic rosemary bushes that seem to thrive in Brittany. When I was little we would holiday in Trevignon and be sent out on an evening stroll to subtly borrow some rosemary for dinner from the most magnificent bush that spilled onto the road. Like the shared bread ovens on the Continent, wouldn't it be wonderful to have something similar with herbs? Guerrilla herb growing anyone?
Posted by The domestic novice at 18:30