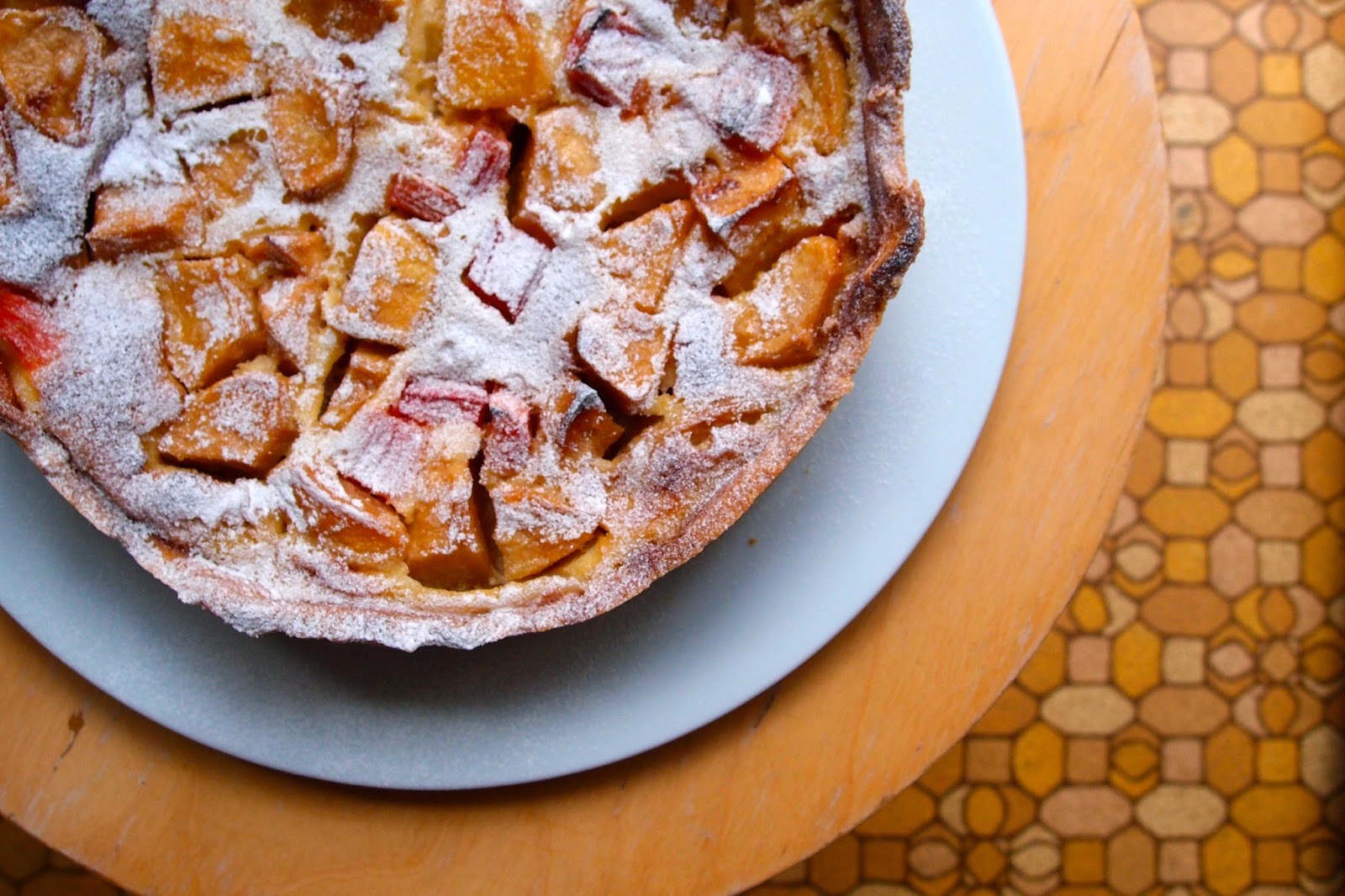 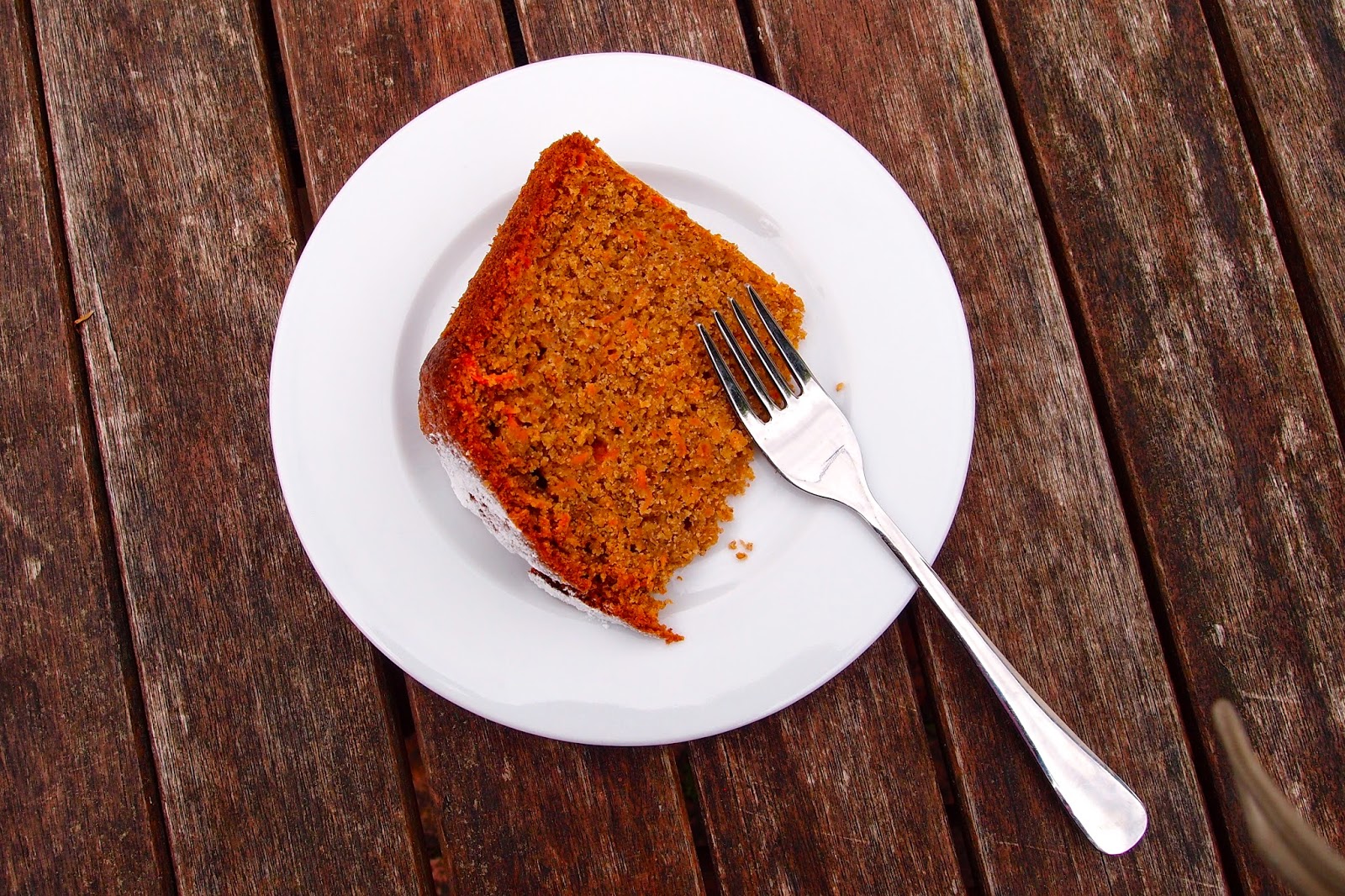 Hope you've had a lovely weekend. We've had a weekend of birthday celebrations over here for the two Taureans in the family. My parents came for lunch yesterday to celebrate my mother's forthcoming birthday, and we're off to a new sushi joint tonight for Mr M's. I've not baked properly for a while, so thought I'd try two new recipes.

First up - Eric Lanlard's rhubarb and apple tarte Normande from Home Bake with our retro kitchen floor providing the perfect 1980s French gite backdrop. I had the ridiculous idea that I would bake this the night before - forgetting that we had Mr H for supper, and whilst I have been known to bake during the bewitching hours, sleep and red wine won out. So - this was thrown together Saturday morning, whilst Mr M cooked the chunky ragu from The Two Greedy Italians on the hob. I used ready-made shortcrust pastry and blind baked the tart case. I then egg glazed the inside as recommended by Eric to avoid the dreaded soggy bottom and popped it back in the oven until golden. Once chilled, I pulled the rest of the pud together. I mucked up the fruit bit - I made rock hard toffee (rookie error) which definitely didn't feature in the recipe - but the fruit was fine so I ploughed on regardless and they got thrown into the tart case. Quick mix of the egg, sugar, double cream and brandy poured over the fruit and then the tart was baked until golden brown. Once chilled I gave it a liberal dusting of the cook's equivalent of concealer, and off it went to the table to be devoured with lashings of creme fraiche and ice cream.

For the birthday cake, I made Rachel Khoo's carrot and coconut cake from My Little French Kitchen. Now - the last time my parents came for lunch, I made a pud from Rachel Khoo's cookbook and promptly dropped it on the floor at my parents feet. Something that hasn't yet been forgotten…so no pressure then. I do like how easy carrot cakes are to make. I completely forgot to buy ground cardamon, so ended up digging out the pestle and mortar to make my own. I've not baked with wholemeal flour before so was intrigued to see the rise, albeit with the aid of baking powder. It was in for just shy of two hours but that's most likely down to our ancient gas oven. The result was brilliant - a ginormous, moist carrot cake. I opted for the light version - dusting of icing sugar rather than the full creme fraiche coconut icing - purely because it was due to follow hot on the heels of the pud. Alas we were too stuffed to even fit in a sliver of cake. So, my parents were sent off with half and I had some for breakfast this morning. Having a frightful sweet tooth, I think it would benefit from the deluxe icing - I might quietly mix up a little pot for dollops of heaven with each slice.

What did you bake this weekend?
Posted by The domestic novice at 15:38