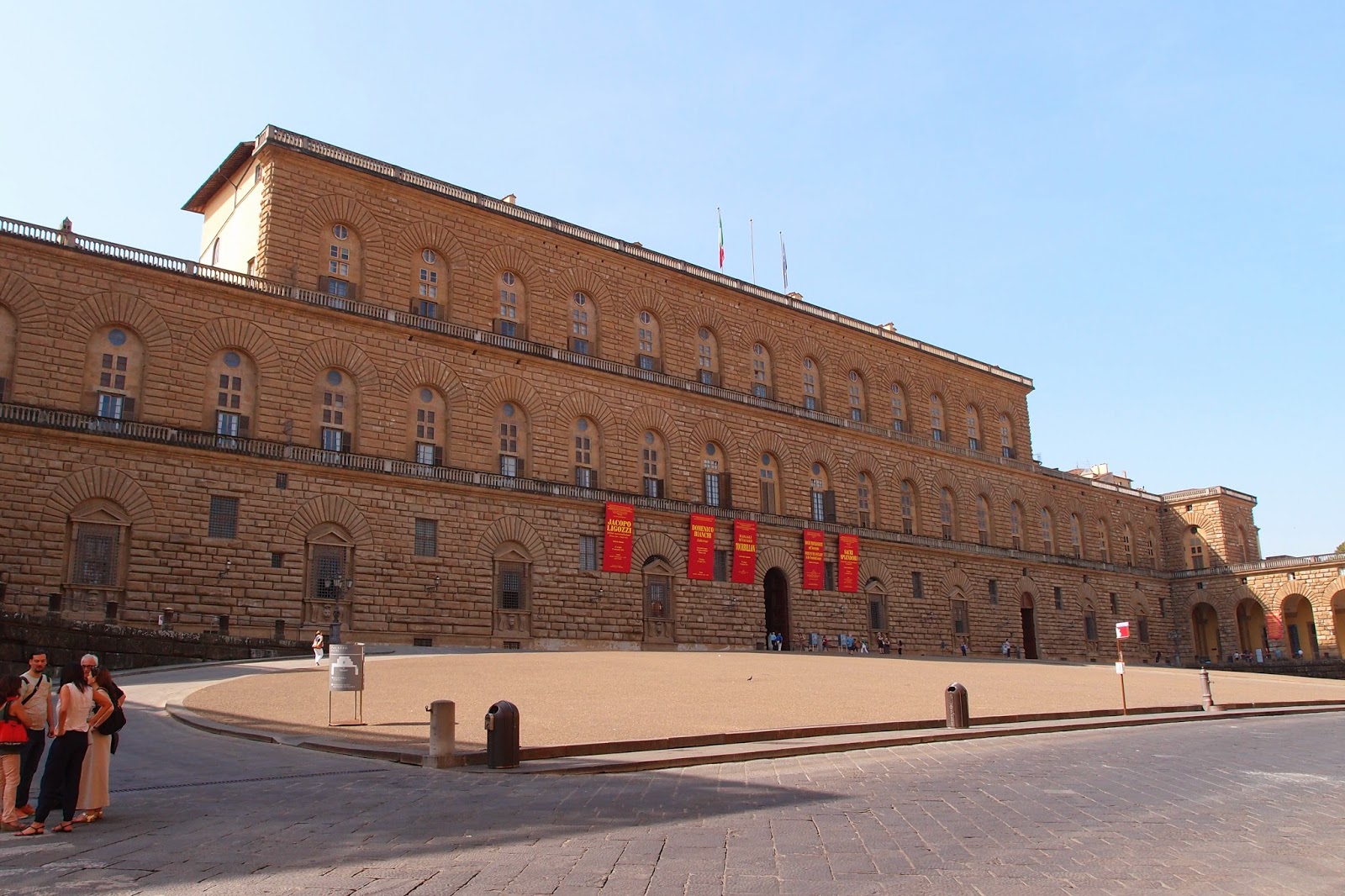 Up early, we hotfooted it across the Arno to the Palazzo Pitti to go to the Giardino Boboli. I wasn't quite prepared for the size - what a palace - talk about imposing. A little like having Buckingham Palace directly opposite - you'd need net curtains. Having found the ticket office (we bought the garden ticket so that we could do both Boboli and Bardini), we made our way through the courtyard and out the other side. 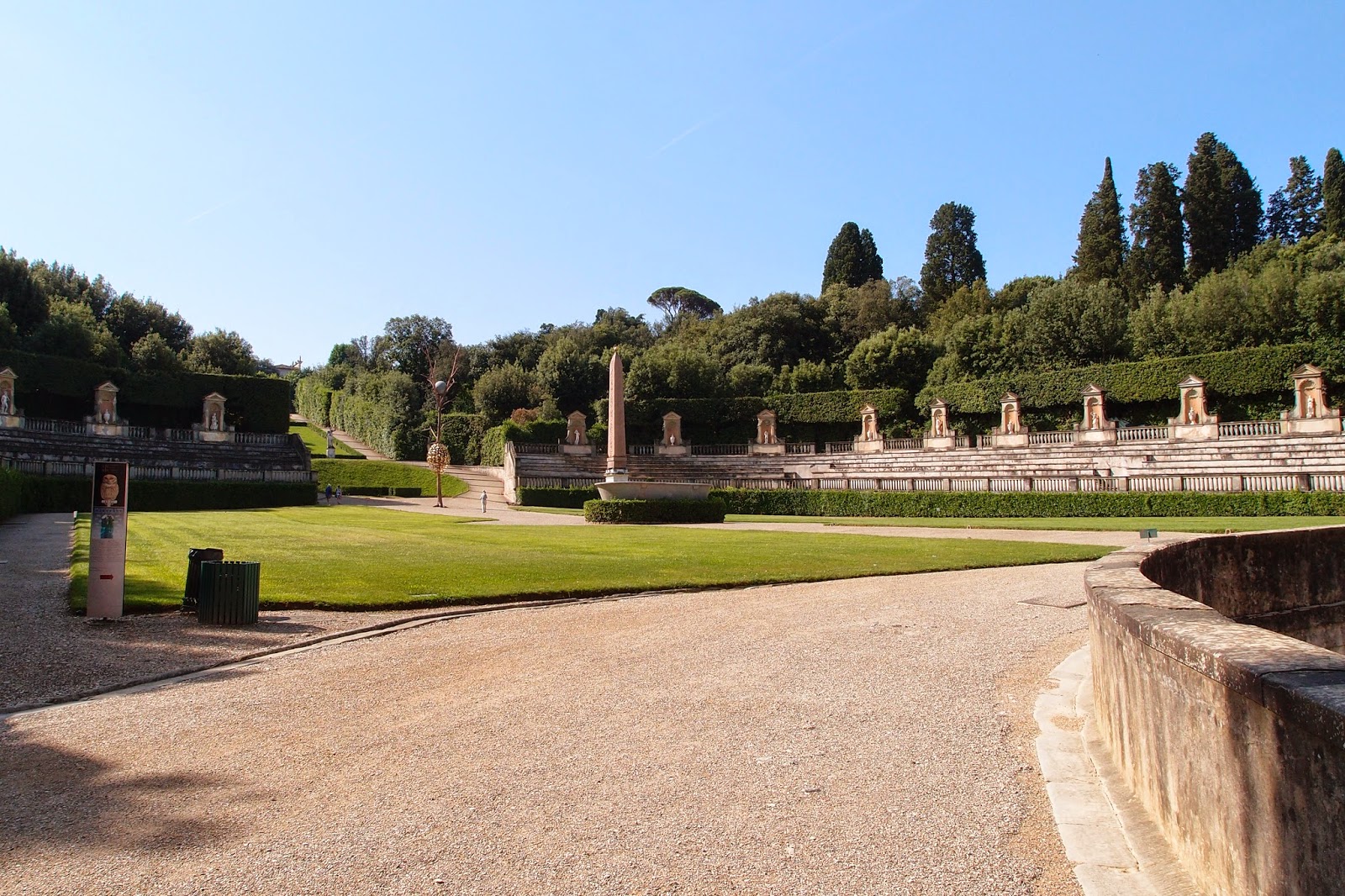 Now - we both vaguely remembered the garden from Monty's Italian Garden series (clip here), and when I say vaguely - as in "didn't Monty do Boboli?", "I think so." So, we felt prepared. Perhaps, not quite so much on the scale - 111 acres. Nor the contours - it was once a quarry. But I had my comfy sandals and a hat, so we were good to go. 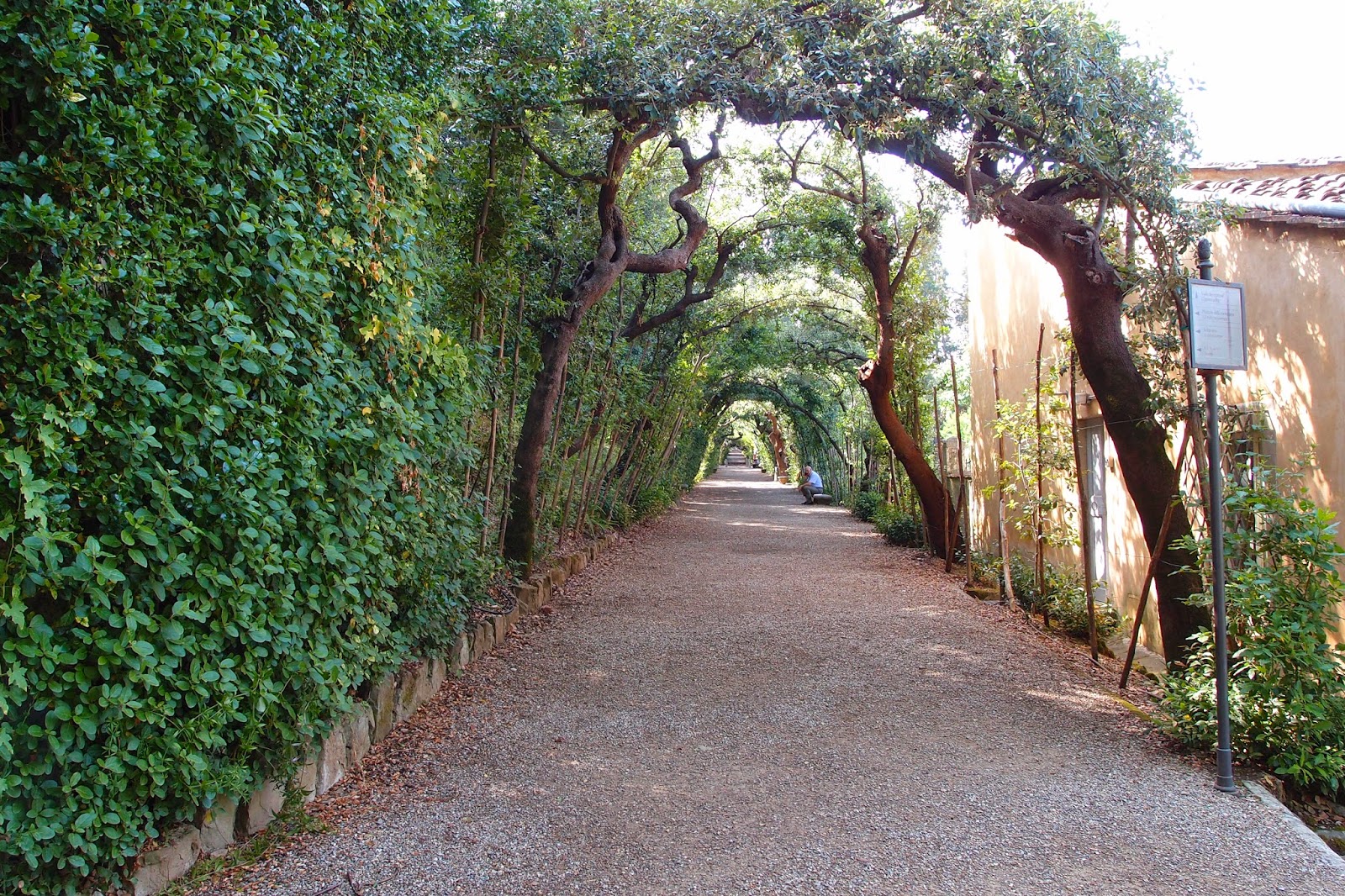 I wish we'd picked up a map. Or that the sign posting was better because for the uninitiated (us) there was a great likelihood of walking in ever decreasing circles when you thought you were going North. 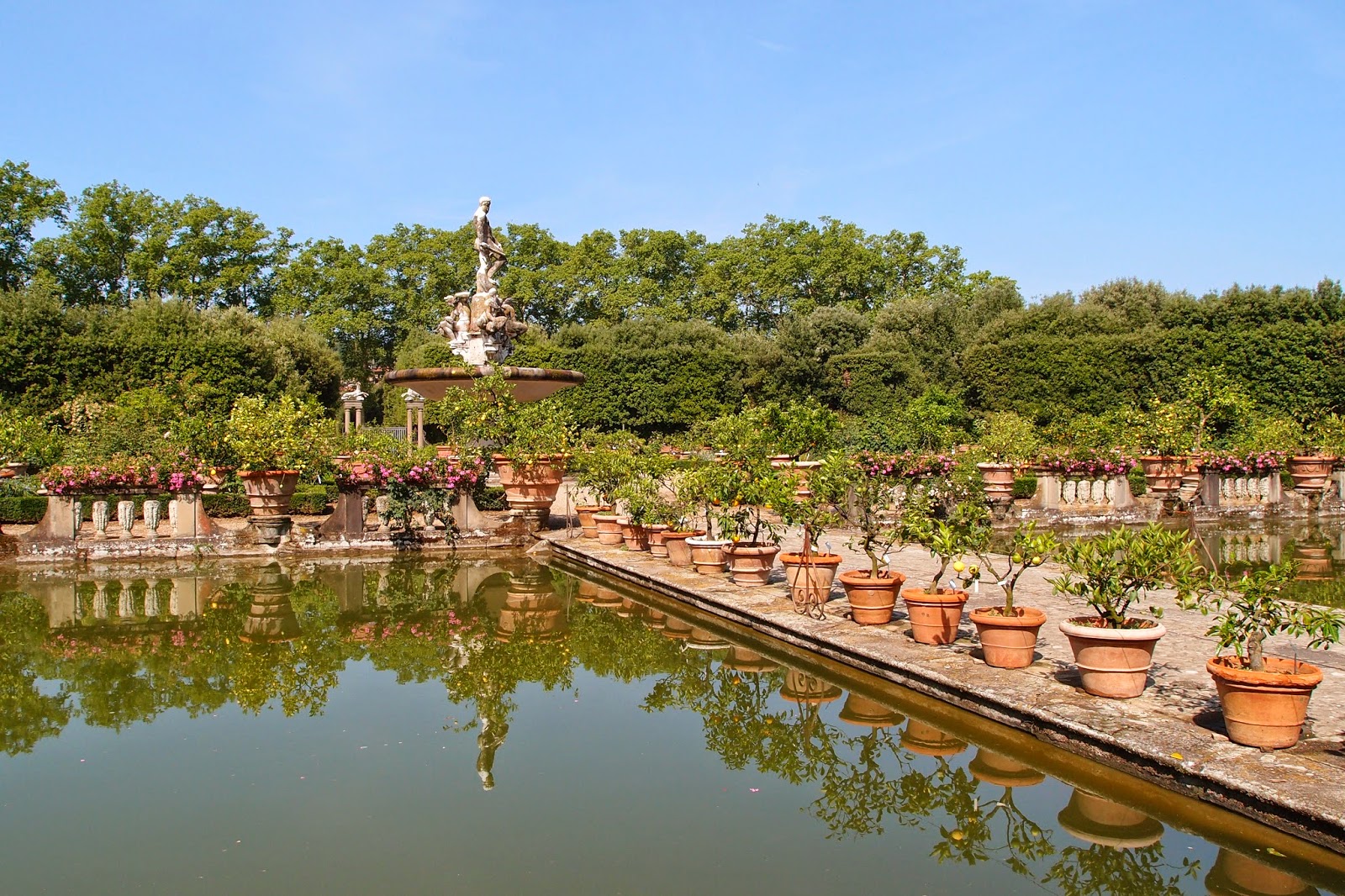 We found the fountain, at the bottom of a seemingly ridiculously steep path - the fountain wasn't working, the path to the bridges locked. But we did marvel at the swifts flying low to catch midges and mosquitoes, touching the surface of the pond as they dipped. 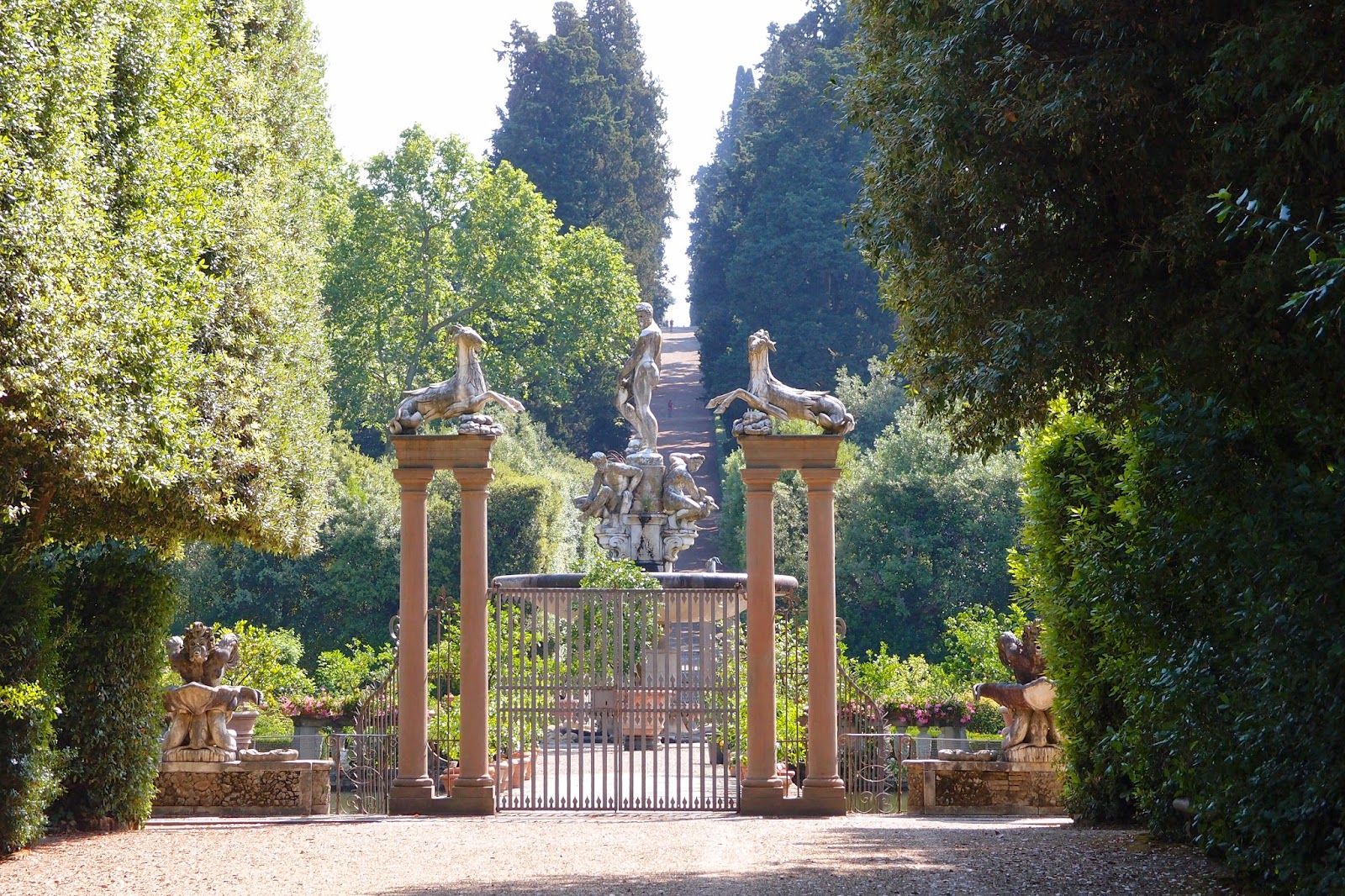 Back up the hill in ridiculous humidity to what we shall call the giant head garden. But before we get there, look at the climb - it's up there, to the right of statue's head. 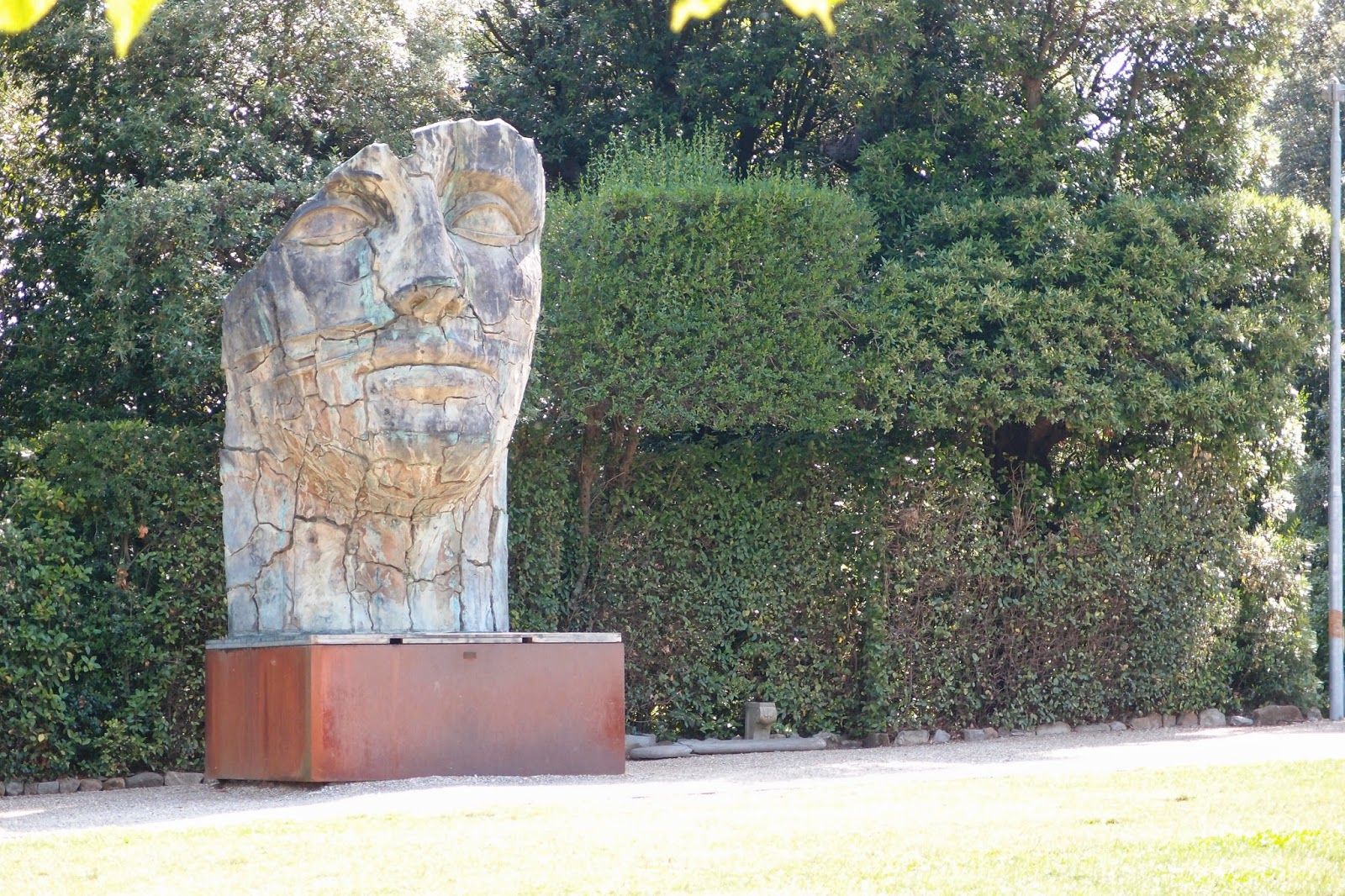 So, the head. Really quite striking.  If you go - do walk behind it. There are some humorous buttocks that have been cast into the back of it. Onwards and upwards to the porcelain museum, where we found a very sweet formal garden, but more importantly an incredible view. It's very easy to feel that to be deemed an incredible view in Florence it has to feature il Duomo. I disagree - there are some equally delightful sights away from the cathedral, which makes the physicality of Florence all the more astonishing. 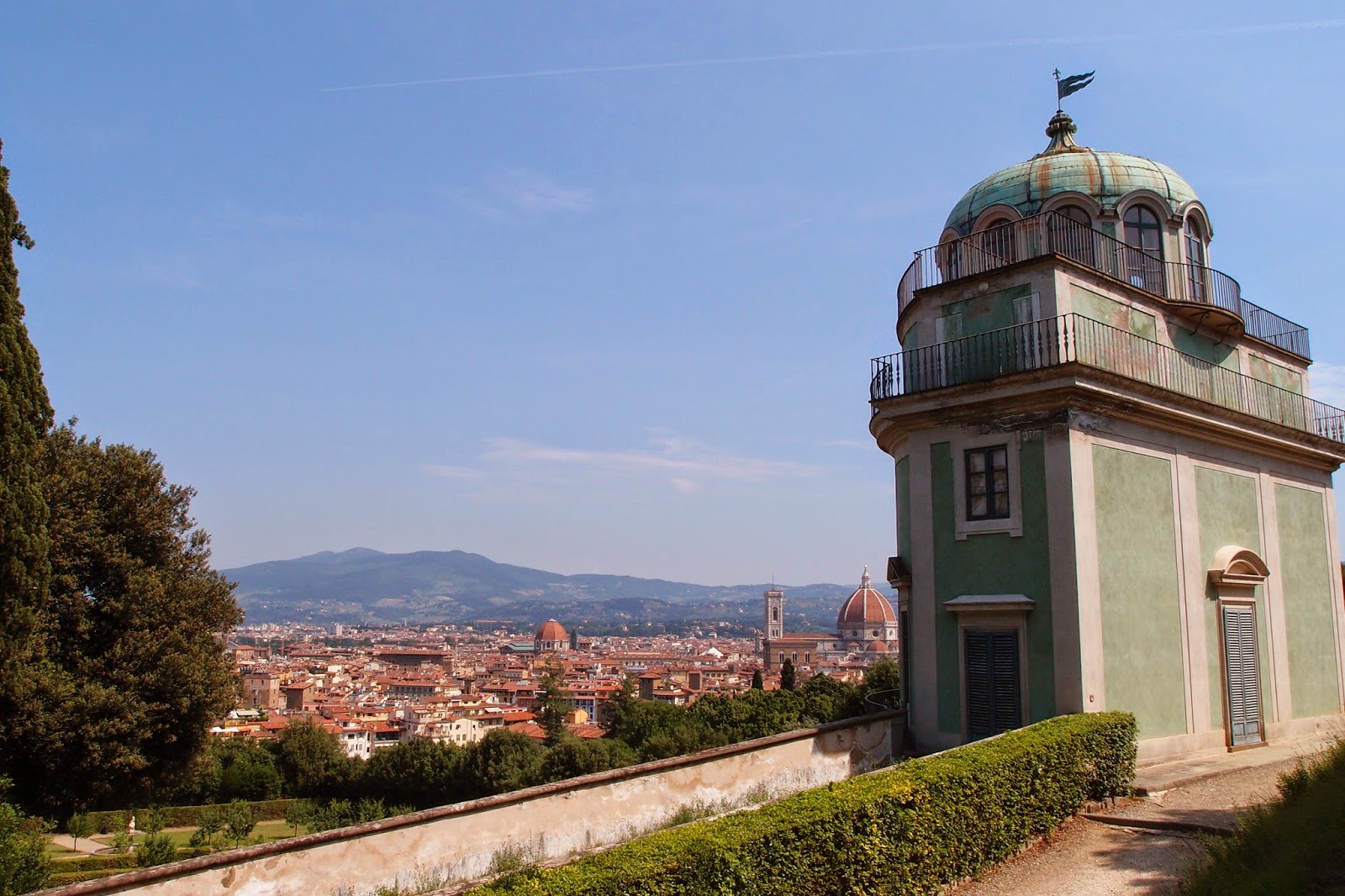 We made our way past the vineyard and the shouty cat to the coffee house. I naively thought that this might be a cafe with a glass of refreshing cold water - ha, wrong. But pretty in mint nonetheless. 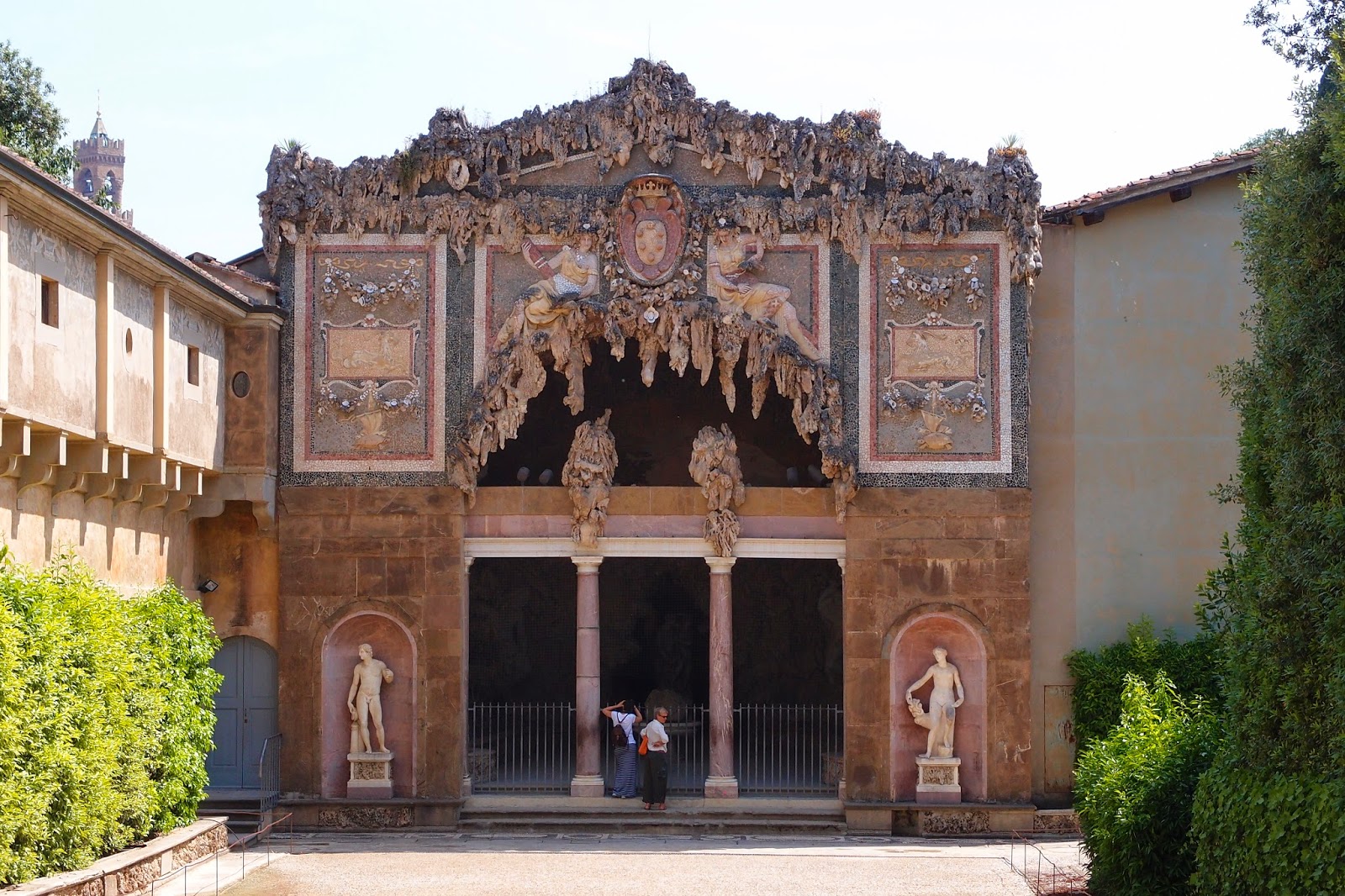 Down the winding path to the grotto, enjoying a moment of shade and spying what looked like a hummingbird. We arrived just in time - the keeper of the grotto told us that we had one minute - so in we dashed, I think we managed to push it to 90 seconds. As soon as we were out, the gates were padlocked and those who arrived after us were left disappointed. See - look at their disappointment. 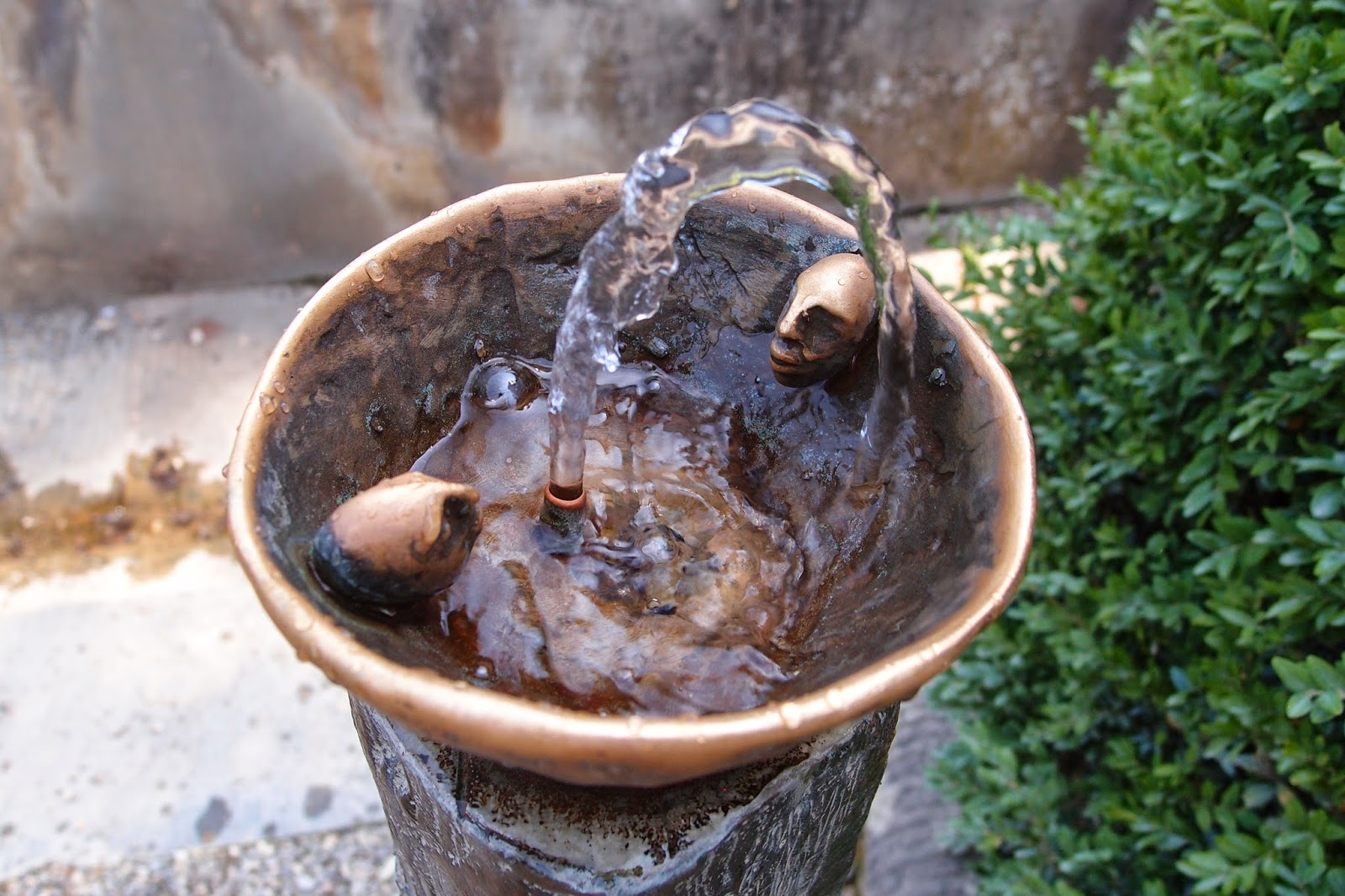 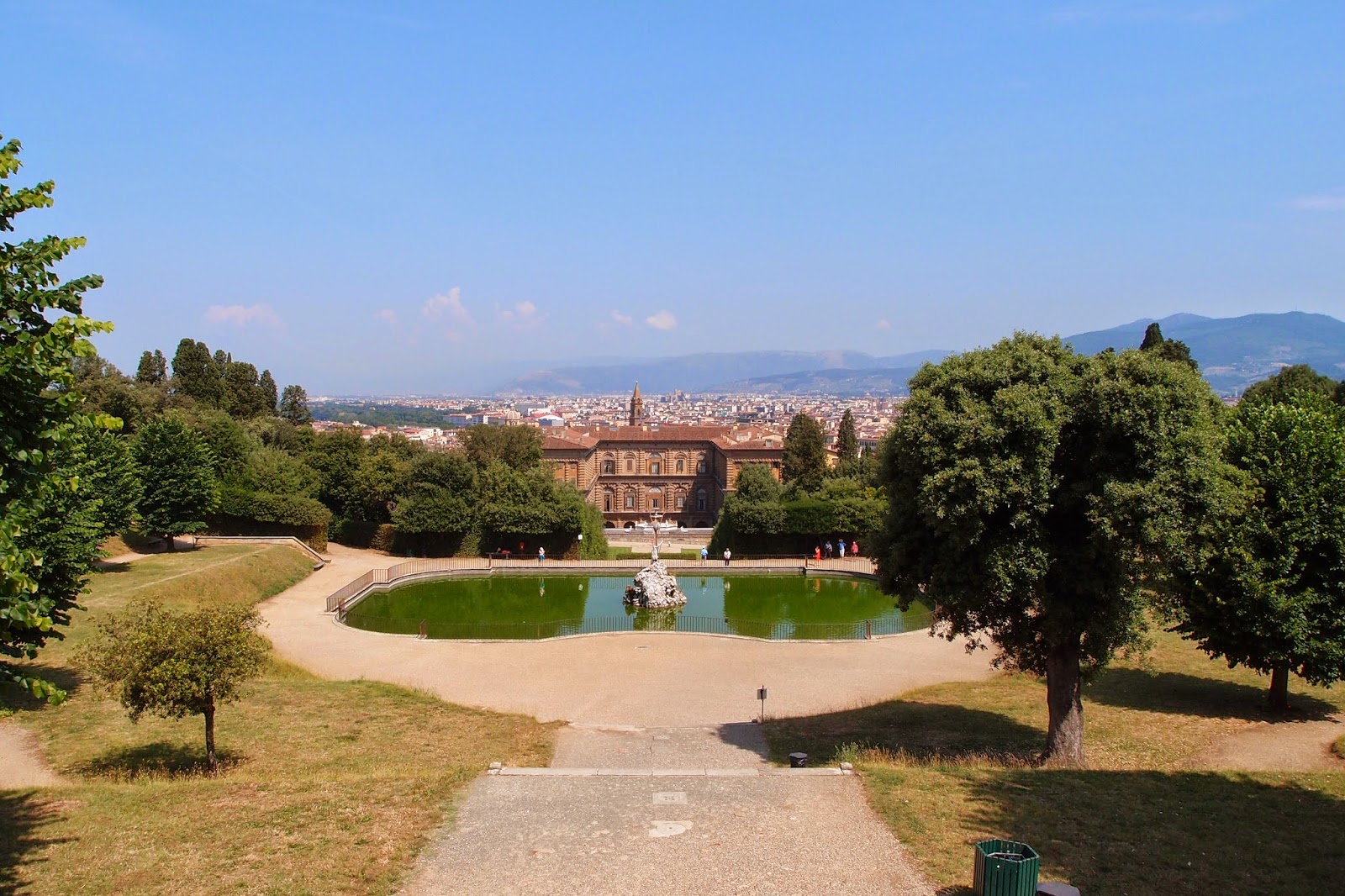 Whilst it might be one of the first formal Italian 16th century gardens, and it is impressive on scale, it all felt a little sad and unloved. I'm pleased we went but I so preferred Giardino Bardini next door.
Posted by The domestic novice at 23:21