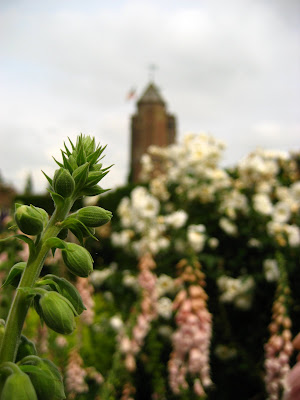 Can you guess where I was taken today?

We hopped on the M25 this morning and found ourselves pootling along country lanes, past green fields and traditional oast houses, until we finally turned left down a narrow country lane and arrived at Sissinghurst. Oh, yes! I have been wanting to visit for absolutely ages. I read Portrait of a Marriage a couple of years ago, knowing nothing about Vita or Harold, and have been captivated by Sissinghurst ever since. In fact, I am halfway through The Edwardians - making it even more apt. And not forgetting the series on BBC 4 a little while ago.

As it was a Monday and the weather was meant to be a bit naff, we didn't think it would be that busy. How wrong could we be! For those who haven't been, they work on a timer system for walks around the gardens. Mr M had been advised to go to the top of Vita's tower before venturing into the gardens, so up we went. The views are breathtaking. It must have been wonderful to have had that as inspiration. Vita's room was a little on the dark, brooding side - but then that rather tallies with her writing. 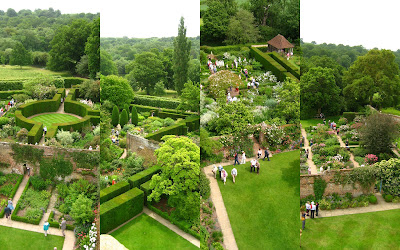 The gardens were beautiful. The planting is magical and June really is a super month to go and see the blooms. The cottage garden was a riot of yellow, orange and red, and the main borders were awash with purple. But be warned, the pathways are narrow and progress is slow at times. I've concluded that I want a tower in the garden (Mr M thinks he may have a few bricks left over from the path) and we both like the idea of a nuttery - a nice distraction for all the Terrys in the garden. 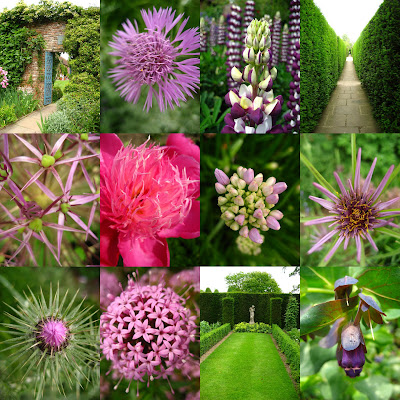 With our stomachs becoming more vocal by the minute, we decided that it was time to go and sample something off the famous Sissinghurst menu. Asparagus tart had caught our eye at the ticket office. And so we joined the queue. And queued. Got bored. Queued a bit more. Discovered that the menu was different to the one that we'd seen. Had a brief discussion over the fact that we didn't want to eat in the restaurant just so that we could say that we had and so we broke free. We decided to hunt down some sandwiches from the coffee shop. And you can guess how that went. We joined the queue. And queued. Got hot and cross. We finally got into the shop to find that there were 3 sandwiches left and one member of staff. Seriously. How is that possible? As sandwiches go - they were nice. But really the moment had passed. Anyway - gripe over. Sissinghurst is a beautiful place to visit. Just remember to take a picnic or eat in the restaurant before you get your garden pass. 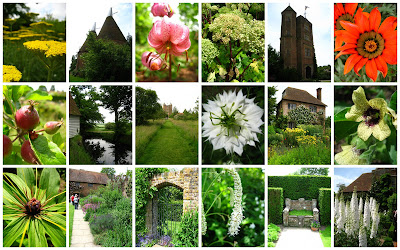 On the journey down, we'd spied the Yalding Organic Centre and decided to pop in on the way home. I can't tell you how excited I was to see an empty cafe and decaff filter coffee on the menu. And homemade scones. And homegrown/homecooked food on the blackboard. Suitably refreshed, we bought tickets for the garden (£6.50 each for the year) and what a find! The gardens are fantastic. Each garden is like a Chelsea plot, together with an educational board and all created and maintained by organic means. We even made a new friend who made her way through one of the borders with a demanding miaow. 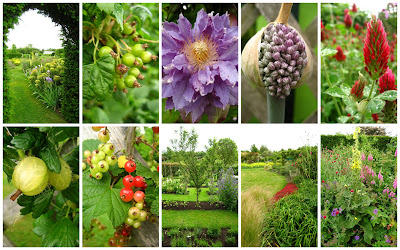 After meandering around, marvelling at how well the plants thrive, we made our way to the farmshop to find something for dinner. Armed with some old spot sausages, local brew and some fresh bread we were ready for the drive home. I cannot recommend this place enough. It is an absolute gem. If you get a chance, do pop in. They even run gardening courses. Oh, and the sausages were scrumptious!

p.s. thank you for your lovely comments about the dress. It's Ted Baker. I spied it in John Lewis, and then Selfridges - but they were out of my size, although the rather eager sales girl in Selfridges did try and get me to try on a size 2 (UK 10) because 'they come up larger'. Erm. Not large enough - perhaps if I had sewn it to the two 0's that were also on the rail...
Posted by The domestic novice at 22:07