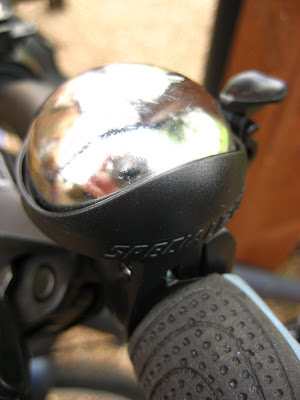 What a jolly, sunny ol' weekend we've had! Walks along the river, our first 99 of the year from the little riverside cafe and, more excitingly, our first bike ride. Yep. Exercise. A word which hasn't been heard around these parts for quite some time. And did I mention the small matter of it being the first time I'd been on a bike for about 15 years?

Ahh - my bike. I love my bike. It was purchased after lots of hmming and ahhing with birthday money from my Grandpa a little while ago* and has been eagerly awaiting its rather busy rider. I bought my beloved bicycle a basket yesterday so that I can pop to the market and cycle home merrily laden down with lots of lovely wares without being a danger to myself or others. Mr M thought I was joking when I picked it up in the shop. It's marvellous. I think he's secretly relieved that I didn't pick up the wicker version. Tsk. The only reason being that it would look rather silly on my super-duper-modern-hybrid-malarky-thingummy-with-two-wheels.

Our bike ride today had a wobbly start. Since when did bikes have gears at the front and the back? We had to veer off into a side road to sort me out, but once I had the balance just right there was no stopping me. Until we stumbled across, nay joined, a sponsored run with runners using the cycle path to overtake the competition. The finish line was unfortunately at the market place which is also the route of the cycle path. After a slight detour to avoid sweaty limbs and flying energy drink bottles, we were on our way to Hampton Court. If there hadn't been so many people about, I would have lifted both legs off the pedals and shouted 'whhhhhheeeeeeeeeeeeeee'. It was so much fun. According to Mr M, our leisurely approach didn't really constitute exercise, but then he's meant to be training for the London-Brighton bike ride. I'm sure that calories were burnt just getting my cycle helmet on and truth be told, I am suffering a little from bicycle-ride butt.

So, if you happen to be in the area and spot a rather new, slightly wobbly bicycle with a cushion strapped to the seat, it's probably wise not to beep the horn and opt for the wide-berth approach.

*Now, I must confess that when I say a little while ago, it may have been a little-while-ago-say-two-years-perhaps. Do you find that time seems to slip through your fingers as well? Emails that you were halfway through get saved as draft and phone calls that you've been meaning to make fall by the wayside? The greatest of intentions? No? Just me then. Anyhoo. I digress.

Posted by The domestic novice at 00:14

Email ThisBlogThis!Share to TwitterShare to FacebookShare to Pinterest
Labels: life