Last Monday, on one of Mr M's days off (to recover from the London to Brighton - cramp, sore parts in spite of padded protection and general aches etc) we popped to Garsons and did a little PYO. The sun was hot, hot, hot.

There is something about Pick Your Own that whizzes you back to your childhood, when summer holidays were made up entirely of hot, sticky days with never ending blue skies, soaring swifts and the lightest of butterfly breezes. 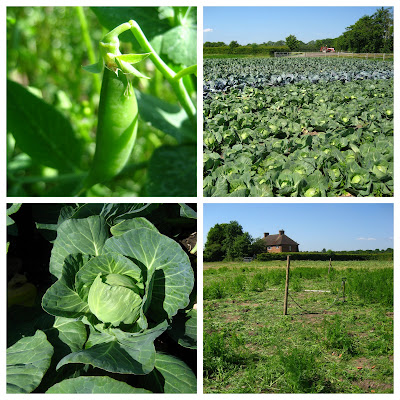 First stop - sugar snaps and mangetout. Interesting fact - weeds are grown amongst the sugar snaps to give them support. Clever! It also hides the best of the sugar snaps from the average PYO-bod. Double clever! I was highly amused by the carrot bed that had forks attached to a chain so that you could only ever dig in a circle. With our bags stuffed, we paid for our hoard and hopped in the car to the gooseberry field. 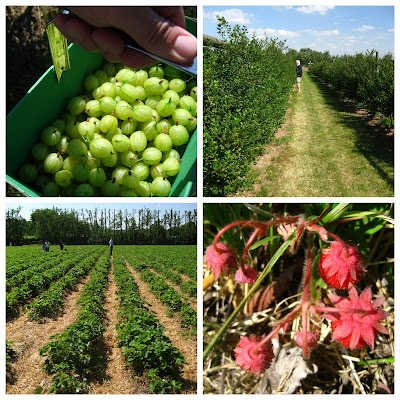 There were some die-hard gooseberry fans who had clearly been there for some time as their punnets were filled to the brim. We found a row where the bushes were groaning under the weight of their sun-warmed jewels. A punnet full later and it was off to the strawberry field. A pretty cost effective way to ensure tasty, not frozen in transit or picked too soon produce.

As you know, the strawberries were made into this delectable treat. My half that was popped in the fridge for the next day didn't make it beyond my 11 o'clock coffee. Mr M managed to adhere to the German rule of coffee and cake at 3pm. Apparently his work colleagues were rather confused about where the cake had come from and were worried that they had missed out. The sugar snaps and mangetout have made an appearance in every salad that we've eaten over the past seven days. A handful popped in the colander with boiling water direct from the kettle poured on top until they go bright green is all they need. Run instantly under the cold tap and they retain the crunch and are heavenly.

The gooseberries on the other hand were relegated to the back of the fridge due to the incredibly ripe strawberries. We had intended to make a gooseberry fool, but we just never quite got around to it. On Saturday, whilst rummaging around in the fridge and keen not to let anything go to waste, I pulled out the leftover sponge and gooseberries and became a woman on a mission to make a gooseberry semi-freddo meets arctic roll concoction. And do you know what? It worked. 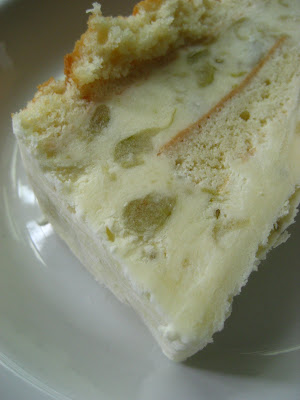 Ingredients
375g gooseberries
70g caster sugar
1-2 tbsp water
150ml double cream
400g Greek yoghurt
Sponge base - see recipe here
We're keeping ours in the freezer and cutting a slice whenever we fancy. At some point I will move onto a lettuce and fruit only diet but with no major beach holidays booked, I'm not so worried...
Posted by The domestic novice at 10:00

Email ThisBlogThis!Share to TwitterShare to FacebookShare to Pinterest
Labels: Recipes