A jolly fine weekend (Sports aside) 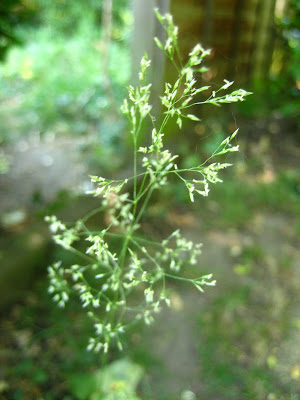 This weather is absolutely stonking. Like the summers that we used to have when we were little - where paddling in the river and sitting in a paddling pool were expected. For once though, I'm rather grateful for the vast number of trees in our back garden which create large swathes of shadow. When I was a teenager, I used to worship the sun - it was my friend in the fight against the dratted acne - but now, I'm a bit of a wuss and tend to shy away from it with sun factor in the high double figures - I can't believe I used to use an 8...and that was if it was really hot... How times change.

Miss P has been rather beside herself with the heat, but rather than utilise the joy of thick, Victorian walls and bare floorboards that are at her disposal, she has found numerous spots which start out as shady places of sanctuary and become throbbing, hot plates much to her disgust. It's quite fun to play spot the camouflaged cat. Our favourite to date has to be our neighbours olive tree - for Miss P is frightfully nosey (aren't they all?) and she has taken to surveying the neighbourhood noise from up high. All that inquisitiveness can be quite exhausting apparently. 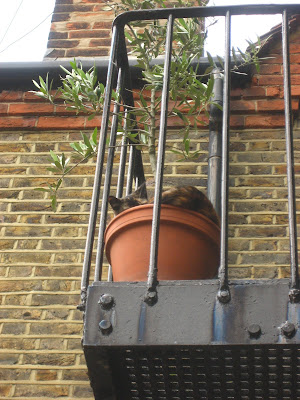 She's not the only one - Mr M had to relocate a snoozing bumble bee who had drifted off on one of the towels whilst it dried (nice and crisp!) outside. Said snoozing bumble bee was only spotted after the towels had been brought into the bathroom and Mr M was brushing his teeth before bed. There was some very grumpy buzzing coming from the improvised rescue contraption (tissue) prior to release. 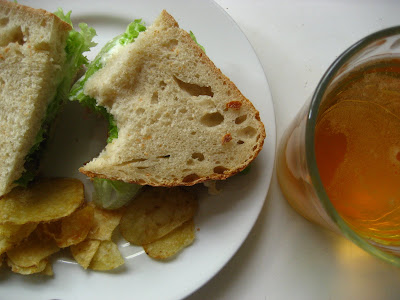 We always try to eat lunch outside unless the weather thwarts us. Mr M's sandwiches complete with salt and vinegar crisps and a cold lager were just the ticket between the Grand Prix and dratted football match yesterday. Cricket was accompanied by dry roasted peanuts, a glass of rose and rather a few tense moments. 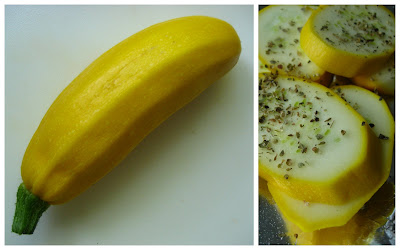 Mr M's veg beds have been coming along nicely. The peas have yet to make it to the kitchen. The winner so far has been the yellow courgette plant bought for 49p and plonked by our front door for maximum sun potential. We had the first courgette on the BBQ in a little foil parcel with oregano, seasoning and a little water. Delicious - the perfect accompaniment to Mr M's special chilli and garlic chicken! We've also become obsessed with halloumi - but I'll save that for another time. There are at least 6 more courgettes on their way, and the squash that we transferred to the front due to it looking particularly sad has finally started to climb - hoorah. Fingers crossed! 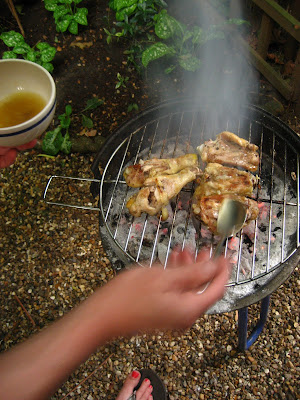 We even managed a 20 mile bike ride on Sunday morning. Pretty darn impressive for my bicycle's fifth outing. We were up before 8am (unheard of in this household unless there is a flight or train to catch) and out of the house before 9. We cycled upriver to Walton Bridge, crossed over and missed our turning due to rubbish signposting. The M3, and crossing over it, was a bit of a giveaway. Not a problem, for I had spied an ice cream van along the tow path so we went back the way we came and had a very rewarding 99 (for moi) and a retro mint Feast (for Mr M). There are some beautiful riverboats and cabins along that stretch. With the weather as it is, wouldn't it be lovely to have a little cabin to retreat to and spend lazy days watching the world go by*. There were some people taking a dip from one of their cabins - it looked so refreshing (even more so because we were rather hot from over-cycling). I love the river - I do have a tendency to get all Swallows and Amazons about it. The tow path was pretty busy on the way back - we came across a sponsored dog walk which was more of a sponsored wet dog sit - but we made it home by 11:30 to ensure that no sport was missed. Webber's crash was pretty spectacular - what a lucky, lucky man. 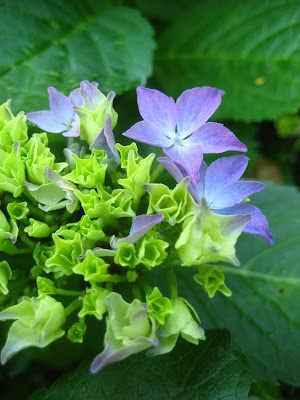 After 20 miles of cycling, lounging was about the extent of activity that I could muster, so I quietly finished reading my book club book - Bel Canto, by Ann Patchett. It was my turn to choose and this looked interesting. It's won awards and has had some amazing reviews but it wasn't really the page turner that I was hoping for. It was rather a so read if I'm honest. It fizzled out like a sparkler. Oh well. 12 more months to go until I can pick another one...To keep track of the book club choices, I've marked them with a BC on my reading list - just in case you were wondering about the Before Christ references...

Gosh, I have gone on rather - I've set up office in the garden under the parasol you see, which has apparently set me off a-rambling. I blame the heat. Or the woodpecker who's currently squawking rather loudly - probably at one of the cats who has clearly set their sights a little too high.

So, that was our weekend - lazy, hot and indulgent. The obvious chores were squeezed in around the edges.

Thank you for your lovely comments about Poppy. Fortunately, my parents are off to Devon which will serve as the perfect distraction. Any tips for Appledore? The house they're staying in backs onto the sea wall which sounds wonderful. The forecast isn't looking marvellous, but hopefully it will sort itself out next week.

*Ha - I just had a quick look at how much a 'little' cabin would cost...£220k for this one which lacks the quaint 1930s look I'm thinking of. This one has the land but at £400k not too sure about the torpedo boat accommodation...
Posted by The domestic novice at 14:31