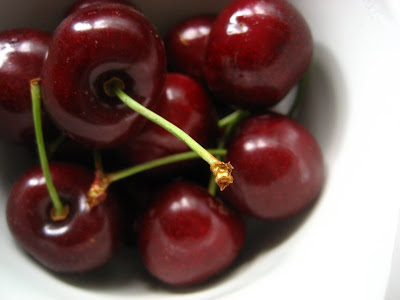 Cherries, blackberries, blackcurrants and redcurrants. The shops seem to be full to the brim with them at the moment. 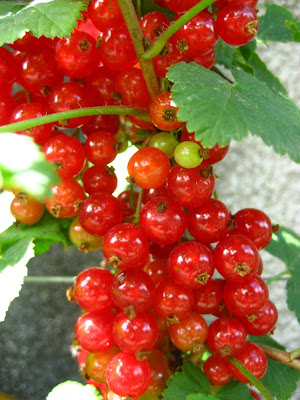 I was very excited to find redcurrants looking resplendent in our supermarket which meant that they just had to go in the basket. With no plan. Which means that the box of beautiful jewels have sat in the fridge for a week. Yesterday I cracked. I could no longer face that sad little punnet each time I went to get something from the fridge. I whipped up a little sponge and gave them the strawberries and cream treatment. 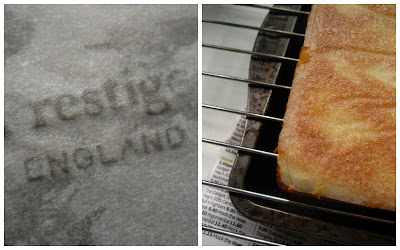 I halved the sponge recipe so that it would fit into a glorious square tin from my mother and experimented with the topping - 1 large spoonful each of Mascarpone and Creme Fraiche with a tiny splash of icing sugar. The redcurrants were mixed with a handful of chopped fresh cherries. 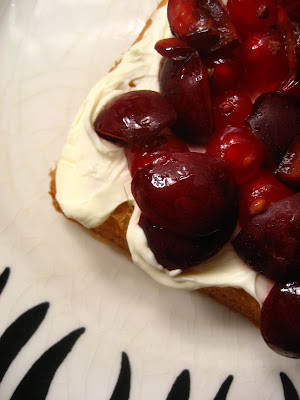 And very delicious it was too. But boy, were those redcurrants tart. Thank goodness for the cherries and sponge. It made enough for us to have pudding last night and a square each today. Mine with my coffee this morning and Mr M's most likely at 3 o'clock. 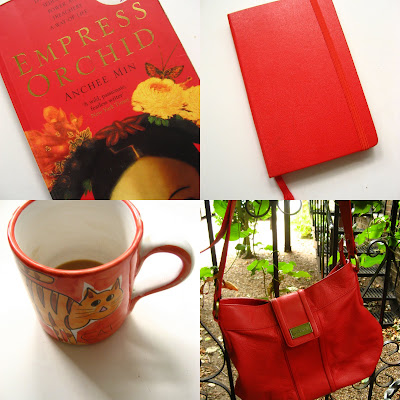 I read the prelude this morning at breakfast and I'm already hooked. Which is a relief because the last couple of books have been rather slow.

[Update] I am now seeing red. We were meant to be seeing Reginald D Hunter tonight but I've just received an email to say that he's pulled out due to exhaustion. Hmmm. Job hunting is quite exhausting. Perhaps you could just email me your set so that I can have a good old chortle. It's the first time we've had comedy tickets for years - the last was Eddie Izzard at Wembley. Right, I have some sulking to do. I might go and join the blackbirds outside who are screaming blue murder - nothing to do with Miss P, who's curled up next to me, but I wouldn't be surprised if Scamp was somehow involved.
Posted by The domestic novice at 11:32