Keeping up with my correspondence has been a little trying of late. I have little excuse other than I am lacking in words. Perhaps it's the premature change in Season. Or the dark days with their grey suit skies. 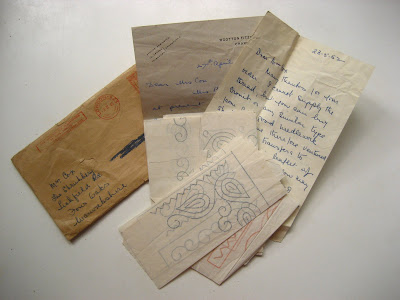 I found these letters in a charity shop folded up with some embroidery patterns. Correspondence from a time when the words Google, Gmail and Bing would have sounded alien, when using a first name was deemed poor manners and when mail order was the order of the day. The postmark on the envelope is dated 1940 - the stamp long gone, hopefully pasted into an album somewhere. All rather apt as my book club book for this month is - The Guernsey Literary and Potato Peel Pie Society by Mary Ann Shaffer and Annie Barrows. I must confess that the idea of reading a book of letters sounded utterly tedious but I am absolutely enthralled and reluctant to put it down. 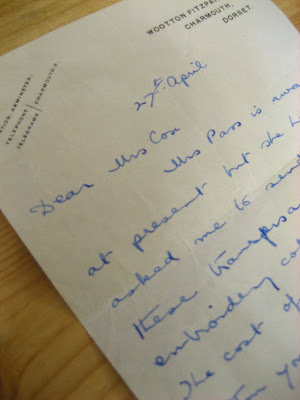 Letter writing and its demise is oft-lamented. And I agree. There's nothing nicer than receiving a note in the post. Although I am always quite astounded at just how expensive it is for a first class stamp. My letter writing skills are far from top notch. Some of my friends are marvellous letter writers. I am always envious at the ease with which they find exactly the right words. An old acquaintance recently got in touch to say that she had unearthed our teenage letters from one heady summer spent discovering boys. I have no idea what they contain but it's most likely an early version of Dawson's Creek complete with lake and jetty but minus the vocabulary, clear skin and designs on Tom Cruise. I would have included over-analysis as well, but we were teenagers and we read into every gesture, look, spoken word, song lyric - it was actually exhausting when I think about it. Thank goodness those days are well and truly behind us.
The etiquette of letter writing is one that I have never quite grasped. I always try to send some form of message to say thank you - be it a phone call, text message* or note. Each case is unique. I made a major faux pas with our wedding thank you notes. I got completely tied up with hand printing each card and writing war and peace to each guest. Which meant that it took far longer than it should have done, resulting in a 3 month delay. Topped off with friends moving during that time so some of the addresses were incorrect and one or two going walkies in the postal system. The thank you notes and everything to do with them is the only thing that I would change about our wedding. I wish I had done them sooner. It was such a shambles and I'm so embarrassed. Three years on and the guilt remains. Utterly ridiculous, particularly when it's no longer expected to send a thank you note these days.

We're having a Modern Day Etiquette speaker at our next WI meeting. I'm looking forward to finding out all the things I've been doing wrong. It could explain so much!

Gosh - this post has turned into an essay. If you've made it this far - well done. I'm off to make a cup of green tea. It never tastes as nice at home as it does out, but today I'm going to try it in the teapot.

p.s. I promise to write a post about the WI - I've been asked quite a few questions about them so will hopefully be able to cover them all off in one go.

*This sounds like a dreadful option but it goes hand in hand with letting the other know that one has arrived home safe. Two birds, one stone and all that jazz.
Posted by The domestic novice at 15:39