Jam-tastic times with the WI 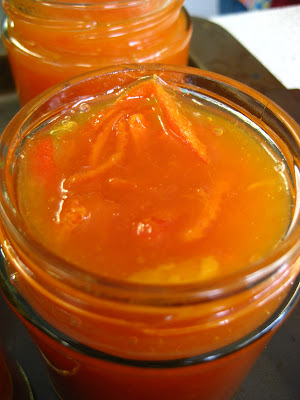 Saturday was 'learn how to make jam the WI way'. A local WI had a couple of spaces left on their jam making course and kindly extended the invitation to our WI, so I merrily skipped along on Saturday morning to the Home Economics Department of a nearby school to play in the green kitchen.
I've never made jam before. Let me give you a moment to gasp*. My mother makes preserves by the bucket load each year - marmalade, spicy apple chutney, blackcurrant jam - you name it. She has all the gear - preserving pans and funnels and very big wooden spoons. I don't. Our kitchen can't really cope with the Le Creuset let alone exciting bits and pieces for making jam. And a dishwasher followed by a Kitchen Aid are much higher on the list for when we do have space. Anyway, I've always been rather apprehensive about having a pan of volcanic sugary lava on the hob. Visions of ruined pans, A&E and a general sticky mess. I'm just a bit of a wuss really.
Well, not any more! I was paired with Mrs F and under the watchful eye of a former Home Economics teacher we attempted two recipes; Peach and Schnapps jam and Irish Marrow Chutney. So much fun. Very messy. Very sticky.

For the princely sum of £9, not only did we get lunch, all the ingredients and a new skill, we also ended up with 10 different jams and chutneys so that we can sample each others jars of joy. How marvellous is that?

Two important lessons learnt - add alcohol towards the end otherwise the flavour will be lost and heat the jars in the oven on a low setting otherwise your hot jam will roar up like a volcano taking the fruit with it. Imagine the opposite of a sinking fruit cake. Whoops. Oh and did you know, if the jam touches the inside of the lid after it has been bottled, it's considered illegal in the UK and you wouldn't be allowed to sell it, but in France it's fine (as it is in my books). So we merrily turned our peach jam upside down and watched the pieces of peach float back to the middle.

And check out those labels. What luck to partner with someone who has just had to do the calligraphy for all the place settings at her daughters wedding and happened to have said calligraphy pen in her handbag. Now, that's what I call WI!

I thought you might like the recipes - I have no idea of the source as we were given photocopies which didn't reference the book so I've made them look pretty. Got to love Publisher. Hopefully you'll be able to read them if you click on the image and then zoom. If you do know where they came from, do let me know!

Rather excitingly, the chutney I made will be ready just in time for the cheese board on Christmas Day. Marvellous.

*Ha - I'd love to hear your gasp when I then tell you that I cooked my first whole chicken on Sunday. I think it's fair to say that Mum was speechless... You see, the problem is that Mr M likes to relax by cooking and has a tendency to elbow his way in after I've done all the prep... I'm not complaining - trust me! Anyway, I did a pot roast chicken and it was scrummy.
Posted by The domestic novice at 17:29