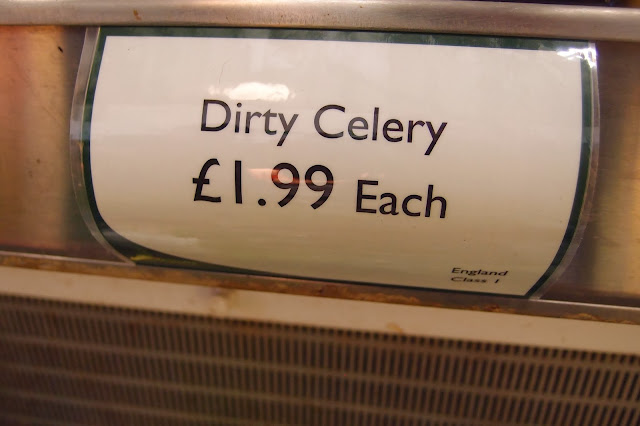 This label made me laugh. We took the Christmas tree to be recycled on Saturday morning at the local garden centre and popped into the farm shop, where said label was spied, to have a mooch. We did actually buy some celery there, but it was cheaper to buy the washed - so strange.

We then spent the afternoon bailing out our garden - nowhere near the horror that so many are experiencing (and just down the road) but enough of a panic for us to spend four hours relocating 100+ buckets of water and making umpteen makeshift sand bags* for the garage and conservatory. We'd noticed it that morning, but assumed it would drain away. Except there was nowhere left for it to go, until it reached the air bricks for the conservatory. So - a fair amount is probably still under the conservatory, but the rest of the standing water has now gone, and the air bricks have now been sandbagged. Our neighbour and his eldest son kindly lent a hand. Oh, the joy of living on the very gentle, so gentle you wouldn't notice, hill. The cottage and garage just happen to be in the way. We were exhausted by the time we called it a day. It feels as though every muscle has been pulled so there has been lots of groaning. Thank goodness for ibuprofen. And buckets. And neighbours. And the frost last night. Mr M bought a pump and hose this morning just in case it happens again.

*Thank goodness the fly tipper who left the remains of a sandpit on our freshly dug French drain back in October. Whilst the expletives uttered in October still stand, that sand came in handy!
Posted by The domestic novice at 17:30